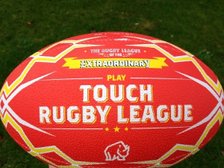 Touch Rugby League Week 2 Round Up

Watson crosses for six whilst Tyreman fails to score.

As usual points were awarded for attending (10), winning games (5), losing games (3) and scoring tries (1). At the end of the season the person at the top of the leaderboard will be crowned Touch Rugby League Player-of-the-Year.

Awards will also be given out to the top try scorer and most improved players. Below are the tables after week 2.

Coach Tyreman had a shocker tonight not crossing for a single score, the highlight of his night was a 30 meter break and with a yard to the try line he managed to run backwards into touch! Just as bad was Frank Bagnall who introduced us to his new set of Touch RL Rules and who does not even make the top ten try scorers leaderboard with just 1 try scored all night!