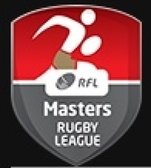 The Southampton Spitfires made history yesterday as it fielded its first ever side at a home game. 15 players represented the Spitfires against Sussex Merlin's and scored 4 try's to the Merlin's 2 leaving the games final score as a 0-0 draw as is the case with all Masters Games.

The first period was evenly matched until a loose carry from the home side gifted the Merlin's possession deep inside their half. The Merlin's took full opportunity of the possession and crashed over from 15 meters out to take a 4-0 lead.

The Spitfires however were soon to draw level after good forward carry's from Rob Phillips and Jon Hadley allowed scrum half Shane Burnett to find Nick Cazueax at centre who crashed over to make it 4-4.

The lead was short lived the Merlin's once again using their forward power to break free and beat the fullback to score making it 8-4 to the visitors. The game was a tight contest with both sides completing sets of six with the Spitfires just edging field position thanks the the intelligent kicking game of stand off Glenn Tyreman.

The second period started well for the home side after Prop Forward Fran Jones broke free to race 50 meters to score to level the game up at 8-8. The game was to stay locked in a draw despite good efforts from Nigel Miller and Chris Kilby.

The Spitfires ended the second period well with Loose Forward Adie Smith crashing over to score only for it to be ruled out for a completed tackle.

The third period was once again a tight affair with both sides looking for the winning score but none coming. The Spitfires entered the last 10 minutes looking the fresher of the two sides with hooker Pete Watson looking sharp around the ruck area finding forwards Mark Amey and Domininc Hooper who both were still carrying strongly.

Half backs Burnett and Tyreman came close to providing winning scores. Burnett found Andy Pullar with a great short ball only for him to be stopped short of the line. And Tyreman put in a great cut out pass for flying winger Kevin Duckham who managed to cross the try line but was unable to ground the ball.

With only 4 minutes till full time and the game heading for an actual real draw up stepped full back Pascall Garrard who went onto score two try's in a matter of minutes using his pace to get around the Merlin's defence and score leaving the full time whistle to blow and the scores at 16-8 to the home side.