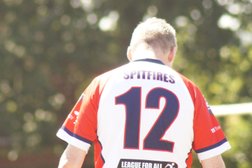 Medway Dragons made the long trip to Southampton for the Spitfires final home game of the Summer and both sides had depleted numbers for this clash in the middle of the summer holiday period.

The Spitfires loaned out two players for the first period making the game a 9 a side contest on a reduced size pitch.

It was Medway who struck first after Joe Egan broke through some weak tackles midfield and then found the on loan Glenn Tyreman in support. Tyreman collected the last pass and out sprinted the cover defence from the half way line for Medways first try of the afternoon.

Next on the score sheet was another on loan Spitfire as Pascall Garrard found some space to race through and score Medways second of the afternoon.

On loan Tyreman then had a hand in Medways third score of the day with a lovely flick pass behind his back catching out the Spitfires defence and allowing the Medway forward to race over to score the third try of the afternoon. Medway then went on to score twice more making it 5 well worked trys in the first period.

The second and third periods were not as productive but Medway still managed to cross 3 times, once from another Spitfire mistake. The Spitfires had a number of chances to score but always dropped the ball at key moments and twice crossed the line but where unable to get the ball down. Highlights of the middle two periods were from Graham McManus who scored two long range trys.

With the Medway Dragons have scored 8 trys in total and the Spitfires scoring none they just had the last 15 minute period to put things right. The Spitfires started the brighter of the two when Tyreman put Ratu into a small gap to break away and score.

Next up to score was Pascal Garrard after Tyreman and Fran Jones linked up well on the blind side to release the winger. From the restart Pascal once again broke free only to be denied by a last ditch tackle, however the Medway defence was stretched and any attack wide would cause problems. The Spitfires spotted this and the ball went through Maccas hands who found Pete Fox. Fox then threw a long ball out to Tyreman who drew the last defender to put Andy Beal away for a nice try out near the corner. With the Spitfires scoring 3 quick try's then were now looking like the team they had been all season.

The last try of the game went to Medway Dragons on the back of another Spitfires error leaving the final try tally for the teams at Medway 9 Southampton 3. As in all Masters games the final score is recorded a 0-0 and everyone went back for a beer and BBQ to discuss the game.

Southampton are still recruiting over 35s for next summer so drop the club a line on spitfiresrugbyleague@gmail.com if your interested.