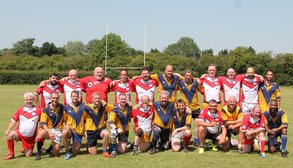 Fun in the Sun at the Colesium

Last weekend saw the Spitfires Masters travelling to the St.Albans Centurions on what was to be the hottest day of the year so far. After a team breakfast @beefeater the Spitfires arrived in good time at the Coliseum ready for this Hampshire v Hertfordshire clash.
The game did not start well for the visitors who found themselves short handed as the home side took advantage of their one-man advantage running in three tries on the flanks as the Spitfires struggled to cover the spaces in the blistering heat.
After the first period break the Spitfires returned to the field re-energized and Spitfires half-back Glenn Tyreman had excellent support from Jason York and Pascal Garrard enabling him to find a whole and sprint the 30m to score the visitors first try.
Soon after full back Garrad was on the score sheet as he managed to outpace the cover defence out wide to score near the corner. With both sides struggling in the heat the referee blew for half time giving the Centurions the bragging rights outscoring the Spitfires 3 tries to 2.

The second half started well for the Spitfires with Tim Powley, Peter Stokes, Jack Belt all making good in-roads to help keep the Spitfires moving over. Great cover defence in the backs led by Andy Pullar kept the Centurion scoreless. Eventually the excellent defence and good completion rate gave the Spitfires excellent field position allowing Tyreman once again with support from Smith to put full back Garrard into a hole and sprint 50m to score. That was to be the last visitors score as the home side ran in three late scores as the Spitfires ran out of fuel.
Final score as always in master’s was 0-0
Man of the Match: Andy Pullar