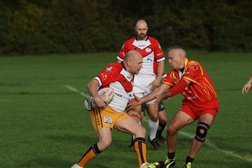 Dragons of fire as they score 5 against the struggling Spitfires

Another 0-0 masters draw was the order of the day but it was Medway who lots to celebrate scoring 5 try's to the Spitfires none.
The Spitfires lost second rower Tim Powley early on with a knee injury but still had depth on the bench to cover this. The Spitfires struggled in the first period with errors and poor discipline leaving them defending set after set.

With the team working overtime in defence it was only a matter of time before the visitors capitalised on tired bodies scoring a few nice try's.
The rest of the game followed the same pattern as the first period with the Spitfires struggling for field position which meant scoring opportunities were slim. This coupled with a high error count and penalty count made it easy for the Dragons to score.

The Spitfires will be heading back to basics at training and looking to work on the areas of weakness. On a positive note we fielded 15 players and so the numbers are growing.

The club is still on the lookout for over 35 players to join the squad. Any interested players can email the club on
spitfiresrugbyleague@gmail.com