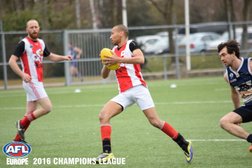 A Moroccan Swan soaring in the Australian Football League of Ireland

Dr. Omar Mamad from Morocco joined the South Dublin Swans at the beginning of the 2015 season having learned to play Australian Rules Football with Bordeaux Bombers in France. Omar came to Dublin to work in Trinity College Dublin as a neuroscience researcher. In his time at the Swans he has made a significant contribution to the club on and off the field. Omar normally plays as a forward and his impressive jump and endurance are particularly valuable assets to the team.

In September 2015 Omar won his first Australian Rules Football League of Ireland Premiership with a narrow two point victory over Belfast Redbacks. In March 2016 Omar was part of the Swans team that appeared at their first European Champions League competition. This tournament held in Amsterdam and organised by AFL Europe had 13 men’s and 5 women’s champion clubs from across Europe competing in separate competitions. The Swans performed credibly reaching the semi-finals.

The history of Australian Football in Ireland is a relatively short one. While there has long been links between Irish Gaelic Football and Aussie Rules, and while a number of Irish players played professionally in Australia in the 1980s and 1990s, most notably South Dubliner Jim Stynes, footy on a recreational level in Ireland has only existed since 1999. The Australian Rules Football League of Ireland (ARFLI) was founded in 2000, laying the platform for the development of the sport throughout the country.
Australian Football has been played in South Dublin since 2002, with the formation of the South Dublin Eagles Football Club. The South Dublin Eagles became the Swans in 2006.

Choosing the nickname “Swans” came through a contact at the Sydney Swans AFL club being able to secure training jerseys from Sydney. In recent seasons the club has continued to drive forward winning three of the last five Irish Premierships. Backboned by a group of long serving players who maintain the club’s open and welcoming culture for all new players and members as well as a keen desire for success on the footy field.

Throughout their history the Swans have consistently contested finals footy whilst evolving from a club which started its existence with a strong core of Australian players to one which is now almost entirely indigenous or international players. The club continually strives to attract and develop new players from all backgrounds and with continued hard work and commitment will hopefully enjoy a successful future to match its successful past.

Australian Rules Football, also called football, footy, or Aussie Rules is a sport played between two teams of eighteen players on the field of either an Australian football ground, a modified cricket field, or a similarly sized sports venue. The sport is played by both men and women. The main way to score points is by kicking the ball between the two tall goal posts. The team with the higher total score at the end of the match wins unless a draw is declared.

During general play, players may position themselves anywhere on the field and use any part of their bodies to move the ball. The primary methods are kicking, handballing and running with the ball. There are rules on how the ball can be handled: for example, players running with the ball must intermittently bounce or touch it on the ground. Throwing the ball is not allowed and players must not get caught holding the ball. A distinctive feature of the game is the mark, where players anywhere on the field who catch a ball from a kick are awarded possession. Possession of the ball is in dispute at all times except when a free kick or mark is awarded.

Australian football is a contact sport in which players can tackle using their hands or use their whole body to obstruct opponents. Dangerous physical contact (such as pushing an opponent in the back), interference when marking and deliberately slowing the play are discouraged with free kicks, distance penalties or suspension for a certain number of matches, depending on the seriousness of the infringement. Frequent physical contests, spectacular high catching, fast movement of both players and the ball and high scoring are the game’s main attributes.

The game’s origins can be traced to football matches played in Melbourne in 1858. Australian football became codified in May 1859 when the first laws were published by the Melbourne Football Club.

Australian football has the highest spectator attendance of all sports in Australia. The sport is also played at amateur level in a large number of countries across the globe and in several variations. The most prestigious competition is the Australian Football League (AFL), culminating in the annual AFL Grand Final, currently the highest attended club championship event in the world. The rules of Australian football are governed by the AFL Commission with the advice of the AFL’s Laws of the Game Committee.