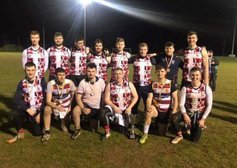 CIT come out on top!

Last Wednesday we held our first AFL Ireland University Intervarsity’s in Cork Institute of Technology, sponsored by Shea Sports (https://www.sheasports.co.uk/).
Reigning Fitzpatrick Cup champions UCC were hoping to keep up their great run of form heading into their Fitzpatrick Cup final game against Oxford. Whereas, CIT were gunning to even the score against UCC, after they were beaten by UCC in the Irish leg of the Fitzpatrick Cup last month. Newly formed DCU AFL travelled from Dublin in great spirits. However, due last week’s postponement, DCU had some late pull outs and so joined the Mixed Universities to match the powerhouses of CIT and UCC.

The first game saw the Mixed Universities play UCC, with UCC getting the better of the Mixed side, winning 8-8 (56) to 2-2 (14). It was then the turn of CIT to take on the Mixed Universities, who much improved in their second game. However, they could not keep pace with the determined CIT Saints, who came out on top 7-3 (45) to 4-5 (29). CIT were in the final with their sights firmly set on UCC. In a fierce contest, UCC and CIT kept the spectators well and truly entertained. It was to be CIT who would lift the Shea Sports Cup in the end, as they came out on top 7-5 (47) to 3-6 (24).

The Irish Universities Head Coach, Brian Currane said afterwards that the improvement in a lot of the players over the past 6 months has been very impressive and this was on show again with some very good footy played through-out the evening.
“The first ever Irish Universities Squad will be named in the next couple of weeks and I am really looking forward to seeing these guys perform in the full 18 a side format at International standard”.

We’d like to send our sincere thanks Shea Sports (https://www.sheasports.co.uk/), who sponsored the competition and to the Cork Institute of Technology Sports Department who provided the facilities for the event. We are also extremely grateful for our umpires Eoin O’Súilleabháin, James O'Callaghan and Paddy O’Shaughnessey.

Next up is the Leprechaun Cup in Belfast on March 23rd, where teams from Ireland and the UK are hoping for a great start to their year with some early silverware!

Team of the Tournament