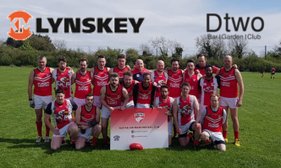 Swans push Redbacks to the limit

The Swans kicked off their 2019 season with a hard fought and narrow one point defeat to Belfast Redbacks Australian Rules Football Club. Despite some tough conditions with an extremely strong wind and rain/hail showers, both teams put on an entertaining game of footy! Using the wind to their advantage the Swans took a 3 goals and 2 behind to 1 behind advantage into quarter time, roles reversed in the second quarter where the Swans failed to trouble the score sheet and the Redbacks matched the Swans first quarter score to take a one point advantage into the half time break.

After the half time break Swans kicked on with great enthusiasm scoring 2 goals and 4 behind and conceding just one behind! The final quarter kicked off with two early Redback goals but the Swans fought back valiantly scoring two goals of their own, the only two of the game against the wind! However, the Redbacks would score three behinds and two further goals, the final goal coming with the last kick of the game!

The Swans will rue not having a little bit more composure in front of goal particularly kicking against the wind, but are delighted with the performance, with a number of individual and collective high points all over the pitch against the Champions league finalists.

We look forward now to maintaining this level of performance throughout the rest of the league beginning with our first away test against the Magpies in Galway on the 11th May.

Also we would like to express our sympathies with Gareth Baird of the Redbacks, who's father who sadly passed away at the weekend. A minutes silence in his honour was impeccably marked by both teams!

A quick word to our sponsors #KMLynskey who's support has been greatly welcomed as has the support of #DTwo on Harcourt street, who hosted some hardcore Swans on their post match gathering and Awards night!

Any Swan thinking of holding a party, or anyone interested in watching both Live and replayed AFL games please get in contact with DTwo as we have organised some special offers for any member booking their social events in DTwo.