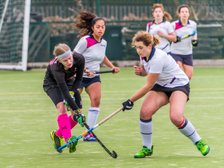 Karen Burgess scored a hat-trick for Southend & Benfleet at the weekend, earning herself player of the match. However the side were still outplayed and lost 5-3 in a thrilling match. Southend & Benfleet managed to score in the first 10 minutes. Both from open play, Burgess scored first from a pass from Kirsty Durban and then the second from Naomi Barker. Bromley & Beckenham dug their heels in and by half-time had scored 3 goals. Continuing with their run, they extended their lead to 5-2 with a penalty flick past goalkeeper Lisa Hawkins. Burgess scored her hat-trick spanking the ball in from the left to the top right.