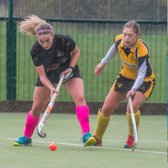 Southend & Benfleet beat Witham in a 2-1 thriller. The home side were looking for the win from the start and player of the match Lily Cole scored first. Caitlin Meredith sent in a cross from the right and Cole fires in to the left post. However by half-time with the rain beating down Witham levelled from a penalty corner. In the second half Southend & Benfleet had most of the possession and a number of penalty corners but Witham’s goalkeeper was having a fantastic game. Cole finally managed to score again for the win.
POM Lily Cole
Share via
FacebookTwitter
https://www.pitchero.com/clubs
Recent news