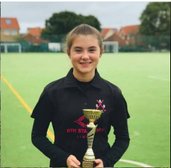 Ladies set sight for a victory on the return

Back on home turf for Southend & Benfleet 2’s this weekend and what a match this was expected to be. Chelmsford 4’s are a strong, well drilled team who always put out a good performance whenever they are visiting and today would be no different. Equally so, S&B have been playing delightfully so far this season, so the game was bound to be a competitive affair between the squads.
The first half started strongly with both teams making significant runs up and down the pitch, eagerly seeking their first goal of the game.
S&B can rarely be faulted for their ability to keep the ball out of the danger zone with regular strong defending from Kiera Stubbington, Michelle Arnold, Emily Richardson and Nicola Ellis, along with keeper Katie Keppel holding her own whenever the ball does happen to slip through. However, with a raised momentum and a highly skilled Chelmsford forward attacking play, the 4’s were able to weave their way through the S&B back line and slot away their first goal of the game.
With Chelmsford a goal to the good at half time, S&B had it all to do after the half time break!
The second 35 started well with Kerry Payton & Lou Van De Velde playing a high attacking midfield with Grace Wright, Chloe King and Neve Harrison offering their skills in driving the ball forward to get the equaliser, but today was not S&B’s day.
As the minutes ticked down, Chelmsford pushed hard again and managed to extend the lead even further and score their second to seal the win, claim their victory and complete a hard fought match overall.
S&B will in no doubt be looking forward to the return match in a few weeks time, where they will endeavour to claim their victory in return!
Share via
FacebookTwitter
https://www.pitchero.com/clubs
Recent news