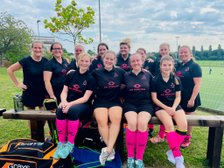 Super 2s off to a super start!

Southend & Benfleet second eleven kicked started their 2021 campaign with the first match being played away to the talented Havering 2’s!

The first half started strongly with both teams making significant runs up and down the pitch, eagerly seeking the first goal of the game AND of course, THE SEASON!
S&B can rarely be faulted for their ability to keep the ball out of the danger zone and today would be no exception. With strong defending from Kiera Stubbington, Emily Richardson and Nicola Ellis, along with Rachel Blades, who made her second team debut, the girls defended the ball solidly amidst the continued Havering attack.

The game developed into an exciting end to end combat with both teams searching for that first hit of the backboard. Who would score first? Who would make the move to turn the game, no one knew!

In 23 degree heat, both teams felt the pace of a the game slowing towards the end of the first half and awaited a much needed break. The team talk from captain Naomi Barker however would be one of enthusiasm and encouragement towards her teammates as she knew the girls had the edge on the Havering side. “We’ve got this girls, we can do this”

Unbeknown to both teams, the drama had only just begun! The Havering team came out strongly in the second half and pressed the S&B goal to the point where a strike would be hit and the ball stopped on the back line via a defending foot. A penalty flick was therefore rewarded and the team quickly and nervously huddled together and immediately turned their hopes to keeper Fran Bates, who was now their only chance to keep the game level.

Bates is no ordinary keeper however. Her agility and skill to protect her goal is as solid as a brick wall and with an acrobatic leap to her right, she confidently saved the penalty flick. The S&B girls naturally erupted with cheers and celebrations as the relief they were still in the match sank in.

The game was STILL there for the taking and with the boost of a penalty saved, S&B drove on with strong and nippy midfield runs from Lou Van de Velde on the left and Georgia Middleton over on the right.

With only 7 minutes of the game remaining, now was the time to push for the win.
Kerry Payton, Neve Harrison, Lily King & Aimee Cole putting increasing pressure on the Havering defence, a short corner was inevitably rewarded.

After a push out off the backline from midfielder Payton to Barker, Payton then darted to the left post to pounce for a rebound. The rebound came after a fumble from the Havering goalie and Payton poked the ball away to give S&B their first goal of the season, and the goal that would seal the win for the team!

A good start to the season and long may it continue…