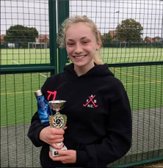 The 3's win 3-2 in a nail biting game against East London.

Although East London didn't have a keeper, which left an open goal for the girls, they were fast and quick to intercept S&B's passes which made the game a challenge.
In the first half East London ran past the 3's defender's to score two goals. Once S&B caught on to their goal hanging tactic, the defence hung back and waited for their forwards to attack and keeper Fran Bates was ready to stop any attempts at a goal.
In the second half mother daughter duo Lily and Claire King were on fire up front. The team tried a new short corner tactic from training and Lily King walloped a goal into the bottom corner. Lily also assisted Claire with the other two goals, one from top D where Claire was ready and waiting to strike, the other from a short corner.
Courtney James won player of the match for her swift dribbles in midfield, she helped move play up the pitch and assisted her teammates.
Share via
FacebookTwitter
https://www.pitchero.com/clubs
Recent news