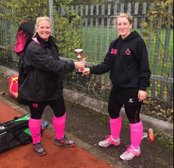 A change to the starting line up with a debut for Olivia Gerrie and a switch upfront with Liv Rutter turning to defensive duties and Lulu Johnson going upfront. Whilst the weather threatened to pour, there was little else threatening about the play in the 1st 10-15 minutes with neither side finding a breakthrough. As the game went on we found our way to half time surprised at the score line of 1-1 against one of their closest foes.
The second half started and as the rain arrived so did the energy from S & B. Greater width from the outlying players allowed more space and freedom in the middle to allow the ball to do more of the work. Codie Rowney continued her goal scoring form with another to add to her tally and Clemmie Farmer, and Charlotte Smith both scored with decisive shots. Special Mention for Lulu Johnson on her first of the season and an outstanding defensive performance from Angie Chambers ensured the scoreline stayed at a very respectable 4-1 to S&B.
When this side play well they really can be a force to reckoned with. More consistency from the start will allow them to push on to even better things. Well done.
Share via
FacebookTwitter
https://www.pitchero.com/clubs
Recent news