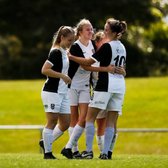 Southern bounce back in strong fashion

On the road, Southern United put six past WaiBop

WaiBOP ‘hosted’ Southern United at McLennan Park in Papakura and the southerners bounced back from their loss to Auckland with a 6-3 win.

The match was evenly poised with Southern United leading 2-1 at half-time, before the Ignacia Sande-coached side found another gear in the second half. Mikayla Gray and Kirsty Hayr found the back of the net soon after the break and Ruby Anderson came off the bench to notch a quick-fire brace to see Southern home. They sit third on the table, with two wins, a draw with the Northern Lights and a loss to Auckland. Unlike Canterbury, Northern and Auckland, Southern are yet to have the bye.