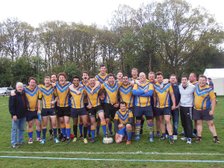 Off the semis Southgate go!

For some people of a certain age, Tuesday nights at 9pm meant one thing ... No, not that Luke, it meant sitting down to Sam Beckett and his hologram pal, Al, in the hit TV show Quantum Leap. The premise of this program was that Sam leapt into the body of people in history to put right what had gone wrong, before “Quantum Leaping” on and “hoping that each time, his next leap, would be the leap home”. We got to experience what this must have felt like on Saturday, as our home match against the Black Horse 3 weeks ago, left many of us thinking that there were a lot of things we wished we could have done again.

However, one thing I don’t really want to have to do over again was the week we just had trying to get a team together. It’s no fun crossing people off a list week after week with no one left to call and still not being able to get 15 guys together. A big thanks therefore go to Luke and Tom for pulling out the stops to turn out for the Gate and giving us a fighting chance. Some may not know, but at 11am on Saturday morning we only had 13 players and were very close to pulling that game, and had called the Black Horse to see about borrowing players – how ironic that turned out to be. I can only put it down to the very tough week we had, what with the news of Zayn Malik leaving the Wrong Direction and Doncaster’s favourite son, Jeremy Clarkson being sacked from the Beeb.

Doncaster’s second favourite son, Taff, was available however and with his mate from the Bill, Chris Mayo (you rarely see him and Charlie Hodgson in the same room together) playing at 9, the streets of Hackney are as safe as the Southgate half back positions. The old centre partnership of Kieran and Tom was back in action too whilst the pack welcomed back the big Brummie mozzarella growing number 6. The front row was also glad to see Brian back ... can’t believe I said that.

Believe it or not, the game was actually won in the first 5 minutes of the match. With the Black Horse electing to kick off possession was conceded back to them with a number of penalties resulting in the pressure building towards the Southgate try line. Attack after attack was repelled with the Black Horse winning another penalty on the Southgate 5 metre line ... what followed were two thunderous hits from both Kieran and Paul that resulted in two Black Horse players having to leave the pitch injured, one of them, their influential captain. This had the effect of both galvanising Southgate and breaking what spirit the Black Horse had. Resiliently, the Black Horse number 10 continued but his injury meant that Southgate were able to pick holes in the back line and Southgate were a number of tries to the good before he came off.

However, by no means was the game over as the Black Horse continued to play with tenacity and make a game of it. With Southgate running uphill in the first half, the performance was even greater. Some excellent hands from the backs and powerful running from all, you would have thought the slope of that hill was against us in that first half. Excellent runs from the forwards together with support play taking us back to those early weeks of the season shows that on our day, we’re a match for anyone. Such was the dominance of the Southgate team, neither Oz, Lynda or I knew what the score was ... we just knew that we were winning and winning well.

The second half saw much of the same, powerful running and big hits continued and finally took their toll on the Black Horse as another player was forced off injured. In the spirit of the game and respect between both teams forged this season, Stef kindly offered to play for the Black Horse to keep the game at 15 v 15. Stef, if I have to tell you again to take your glasses off before coming onto the field, I’m just going to stop and let you play in your bins. However, as one door closes another door opens as Mike decided to snap his collarbone in a rather innocuous challenge and was forced off injured. Stef ... back onto our wing please.

With Southgate exerting their dominance when both teams were equal, there was certainly no let up having a man advantage. The forwards continued to secure good ball through the line out and scrum, taking a couple against the head brilliantly. The mauling was also back to its best, whether that was taking it into contact or defending, summed up by the excellent steal from pack leader Nick who then managed to make another 20 metres down the pitch having stripped the opposition player.

Nevertheless, this was no walk in the park that the score line may have suggested. The Black Horse continued to play for each other and made a number of forays into the Southgate 22 which were only stopped by more excellent defending. Injuries and fatigue were starting to kick in, but to a man we stood tall and continued to play for each other in a throwback to last season. The zero on the score sheet should be celebrated as much as the nine tries and 57 points we scored because without that defensive solidarity in the first five minutes, the game would have taken a totally different direction.

In conclusion, there were so many good things to take away from the match, I couldn’t get them all down but we shouldn’t rest on our laurels. The same intensity and commitment to each other needs to be shown in the next game against Chess Valley, where if successful, we can think about a third final in three years ... Now, that really would be worth celebrating!