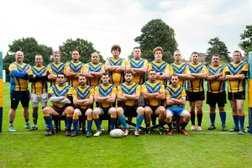 If at first you don’t succeed, score a try, a try and a try again!

If Carlsberg did Rivalries

Perfection varies. One man’s dream is another man’s gangrenous knee. For some, perfection is an aston martin, Cameron Diaz and getting ready to go to a party on a warm night. For others, it’s a damp hillside and a tent. There is however, one constant. Everybody is in agreement that while the actors and the scenes and the plot may vary, the location is always the same. The location has to be Italy. Nearly all my favourite places in the world are in Italy: Lake Como, Rome etc ... and couple of years ago, I found another, a small restaurant in a small village called Limone on Lake Garda. Sitting outside, eating the swordfish carpaccio and local wine overlooking the lake, it was impossibly perfect. I think it’s true to say that nearly everyone I have ever met has at some point harboured a little secret dream that they were Italian as they’re everything most people want to be. Stylish, unconcerned with petty rules, expressive and so I’m told ... well endowed. I once said, “to be born Italian and male was to win first prize in the lottery of life”. Nobody argued. And this is true because for a little while on Saturday, not long, but for about 30 seconds in the second half ... I wanted to be Stef. But I digress,I’ll get to that later.

Saturday’s visit of Chesham was like the Ross and Rachel story from Friends, will they, won’t they ... as we’d been trying to arrange and play this fixture since November with it being re-arranged on 3 separate occasions. But get it on we did as our perennial adversaries made the trip to the Walker Ground in what has to be one of the longest running fixtures in the Merit Tables. To say that Chesham have had the upper hand in these fixtures over the last few years would be an understatement. In my time at Southgate, the record reads: Played 13, Lost 12, Won 1 ... with one of those losses being the cup final last year. And if I’m honest, I didn’t think we’d fare much better as on Thursday afternoon we still didn’t have 15 players. Our captain was off wedding dress shopping ... couldn’t do that on a Sunday, could you? One of our second row had decided to take a holiday, A HOLIDAY, mid season no less. And a variety of other reasons I won’t bore you all with. Thankfully, as we somehow always do, we managed to get 17 guys together, thanks to a couple of debutants namely Dan’s mate Rob and the son of my work colleague, Leo.

The game started with the wind at our backs and after a great kick off from Taff, we immediately placed the Chesham boys under pressure. Try as they might, they were unable to deal with the barrage of tackling, rucking and general aggression being shown around the pitch from 1 to 15 and with each wave of attack, you could sense the Chesham defence was soon about to break. It finally did after some neat work from the backs in the Chesham 22 put Eamonn in and after he skipped passed one and handed off another, he ran it under the posts and, wait for it ... swan dived. Thrilled to take the lead, we re-grouped for the kick off where things just got better. From a Southgate scrum in the centre of the park we managed to get quick ball to the backs and watched as Taff found space in the midfield to open up his legs and break through. With only the full back to beat he side-stepped him beautifully for his 5 try of 2016. To say that we were elated to be 14-0 up inside the first ten minutes against our fiercest rivals would be an understatement but we were in dream land five minutes after that. Again after some great work from the line out and some fantastic rolling mauls the ball worked it’s way out to the backs. Each player was pop passing phase after phase which saw Tom cut an excellent ball inside to the on-rushing Greg, playing at 13 for the first time, to cut the Chesham defence wide apart and give us a 21-0 lead.

Chesham are too good a team to take this laying down and we knew we would face an onslaught from them. As they came back the Southgate defence held strong, making some great tackles inside our own 22 and defending the try line with gusto. However, while we made them work tirelessly for it, the Chesham players did get the ball over the line for their first score of the afternoon. Unfortunately, from the resultant kick off, the Chesham 10 chipped and chased his own kick as we all stood off him and he went over again, 21-0 had quickly become 21-14 and we were back in a dog fight. Some stern words were had and we re-grouped remembering what we had done well. Dan was back to his sniping best, making excellent yards again, whilst his mate Rob was carrying into contact well. Talking of sniping, the rogue sniper hiding in the trees shot Mikey in the leg as he went down screaming after a scrum having been shot ... no, hang on, just cramp.

The second half began in much the same way as the first. Southgate on the ascendancy, but with a slim lead anything could happen. The Chesham 10, continued to kick but we were able to deal with this much better. Leo, playing at full back covered every blade of grass with some excellent catches under the high ball in windy conditions, organising his wingers and returning the ball in hand or with an almighty boot that saw us gain at least sixty metres every time he kicked. The second half was more a battle of attrition, Chesham having the stronger scrum, but with Southgate edging the line out contest. Each team tackled and rucked like their lives depended on it, but it was Southgate who were coming closer to score and once again the Chesham defence was broken as Taff sidestepped a number of players to score a try in the corner and relieve the pressure on Southgate. An excellent conversion from the wing saw us leading 28-14.

And so I come back to my opening paragraph, from the Chesham re-start Stef got onto the ball and like a man possessed, the little terrier bumped the Chesham 7 and left him flat on his backside. He continued on his rampage taking another three Chesham players with him in order to bring him down as he made a good 15 metres and an excellent platform to build on. This seemed to galvanise us further as the smallest guy on the pitch was taking it to Chesham and coming out on top. Southgate continued to pile on the pressure and two further tries, one from Taff and a final one from debutant Leo in the corner sandwiched Chesham’s response. From 1 to 17, every player on the Southgate team played a part leaving nothing on the pitch. Rob led the pack taking the fight to Chesham directly and helped nullify the Chesham 10 in the second half. Dan was back to his best at 9, making incisive runs and organising the pack well, whilst Taff showed how well he can play when he’s not trying to wind up both the opposition and his teammates. I’m aware that his mum, Jackie, has missed the match reports this season so here’s a quick run through of what she has missed ... Taff scoring some tries, Taff arguing with referees, Taff getting some yellow cards. So, as a promise to you both, I will continue to write the match report each week so long as he behaves himself. Because I know that what Taff hates more than being talked about, is NOT being talked about!

Final score, Southgate 40 – 19 Chesham. Well done and many thanks to everyone who turned up to play and support, whilst some may take the individual glory of scoring a try it was probably one of the best team performances I’ve ever been associated with and we should all take pride in this result. Hackney at home next week, let’s carry this on.