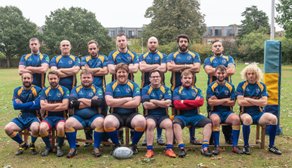 Up and Running against Royston

Sam after the game mentioned that he watched 300 to stir the blood and it inspired a speech in him where every man stands United together. How they used to use their shields not to protect themselves but the man next to them, how it takes every man to stand for his brother otherwise the whole line folds and before you know it the enemy is inside the line and tearing you apart from the inside.

In those times they’ve used the environment around them to their advantage. In the battle of Marathon, the general in charge cut down some trees to cause the battle to be fought on a narrower exchange stopping the enemy from bringing their superior numbers to bear. It's an effective tactic that Southgate drew some good comparisons from in this game.

It was a hot dry day and the pitch was brittle and hard. I can personally attest to this as my shoulder hit it and my hand went numb within the opening 10 minutes. Tom was off five minutes later and never made it back. Royston's captain went to hospital and their front 8 changed a lot as they tried to adapt to the injuries they were incurring. I personally have a lump behind my ear and a nice line of steri strips just under the eyebrow that looks like a boxer’s injuries.

Being the second game for the season and I for one was glad to take a back seat to the returning older heads, who I learned plan their speeches in advance rather than just spout whatever seems appropriate. It was oddly comforting to hear Sam scream at us to try and rally the beasts inside us for war. It was also inspiring to see Steve follow it up with his almost frothing at the mouth encouragement for us to kill, kick and get out of the way of him at the breakdowns or he’d remove your extremities for you.

The game started in a way that really foreshadows most of the game. The kick-off wasn't picked up immediately with the first phase of play leading to a knock on and with that a scrum was formed. I've no idea how many scrums we took part on Saturday but it felt like a continuous entity as if my entire Saturday afternoon was spent in scrum after scrum. I for one feel that I could have done with one or two less, I mean it wasn't raining so I kind of expected a few less scrums but I was wrong.

Despite this our management of the game was good, especially as we restricted their outlets for attack. I mean it says a lot that every time that we slowed the ball down they tried to counterattack by flinging it out to their wingers whom we struggled to keep quiet. So with these weapons brought to bear against us on a wide pitch it says a lot that we only conceded one try. I make mention of our incredible defensive effort (as we defended a lot in the game) as they attempted to make breakthroughs in the midfield, breaking one or two tackles and looking intimidating. We halted these efforts with incredible tackles from our midfield and massive covering tackles from Colin (that I later compared to watching a squirrel fell a large dog). It seemed he should be chewed up and spat out but it was using the spear in the right spot and watching the thing implode.

I'd like to mention that we bought our own weapons in all their glory to bear and employed them to a much better effect. Putting 4 tries over one conversion and one penalty. Stevie Hudson opening the scoring with what looked to be a comfortably worked try that Royston just didn't seem to cover until it was across the line. We won a penalty which I'm fairly sure we didn't deserve. I managed to completely break away from a ruck but all of Royston and most of the Southgate leaving me moving towards their try line with Shane behind me encouraging me to keep pumping with more excitement in his voice than I thought was strictly necessary. He got hit and the ref blew up for the penalty for them coming in at the side of a ruck. I stood their confused and wanting to know if it's still a ruck if they've not re-joined but wisely deciding to shut up let Shane take a penalty instead of getting the try he was obviously looking forward to scoring.

So it's half time and sometimes we pull ourselves apart at half time in a mass of encouragement and support and panic that we may not actually turn up to play rugby this Saturday. That is not what happened we Identified what our weaknesses were and we reinforced those areas of play. It was a composed aggression that is a lot more useful to us than the fits of rage we can neither control or aim correctly.

The second half we knew they were going to kick with the wind in their favour. So every time they did we starved them of the ball. After the game Oz would remark on their ability to chip and chase in small increments and how it was an effective tactic. Well however effective it looked we kept them off the scoreboard for the entirety of the second half. Where as we had the ball a yard out and a free Jack so Steve put one and one together and we came away with a score. Also Sam's supporting run of Phil and then Phil making it back to retrieve the ball off of Sam and putting the ball over the line. It was the sort of play that looks easy when you've got seasoned players pulling it off with ease but something I knew I was never going to be able to replicate personally.

Apparently we only played 20 minutes of rugby if that was someone making a remark on the previously mentioned number of scrums or if it was about the amount of time we played defensive rugby. A combination of the pair or just them insinuating that Southgate was just not coming together as a team except for 20 minutes at some point towards the end. Anyway you look at it in the future we will be looking to cut the excess here. Reducing their time on the ball and tuning into our rugby brains quicker being two such areas. Heading towards a leanness and efficiency that Leonidas and his 300 would be jealous of.