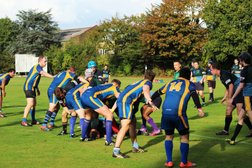 Holding on versus Hackney

Watching Hot Fuzz last week, it made me realise that irregular hours for the police force means that some enter into weird hobbies like Simon Pegg’s character Sergeant Angel who has a penchant for Horticulture. Thankfully we know some officers who spend their free time playing rugby and fortunately all were free to play the weekend just gone. Chris, Stevie, Disney and Josh had all traded patrolling the streets of Hackney to face them on the Rugby pitch instead.

A good response to availability meant that even after a bruising training session, we still turned up with a full squad ready to face a Hackney team who’ve suffered mixed fortunes to begin their season.

After making a point of not repeating the mistakes from last week’s game versus Stevenage we started the game by taking it to Hackney with big hits and equally big carries with Jake and Shane leading the way. The inaugural score came off the back of a scrum, in what is one of our greatest strengths a controlled push from the pack had us close the 7 metres to the Hackney tryline with Shane touching down ball. In what has become a bad habit in our play, inattentiveness after the restart especially at the breakdown saw us concede an almost instant response try, as Hackney shipped wide and quick to get themselves into the game with a converted try. Knowing full well we had the capability to enact our own attacking plans we proceeded to lay siege to the Hackney half for the majority of the rest of the half. Our set piece worked wonders all day long with the scrums having the ability to push the Hackney pack around, with Perfect in the lineout retaining our possession and even managing to steal a lot of their ball as well. It was actually off of a lineout that we got our second try, off of one of the few straight throws I managed in the first half Perfect brought it to ground and set a fantastically worked maul to task as we drove over the line and brought the ball down with Stevie getting the honours this time. We continued to the hard work not only in the set piece but in the loose as well with support being provided to runners and quick ball from the breakdown allowed for Chris and Disney to crash it up through the centres. It was actually this centre partnership that got the next two try’s with Chris fending off his opposite number and the fullback to score under the posts and Disney’s was an excellent run from the middle of the park as he built up a head of steam sprinting down the touchline watching tacklers fall off of him as his momentum carried him over the corner. Unfortunately, this cost him as he injured his hamstring and had to go off subsequently, thankfully Shane made the extras as he converted from a tight angle. But in the midst of our jubilation of gaining a decent lead we slipped into bad habits again, Hackney took advantage of the gaps out wide and punished us for it closing the gap prior to the end of the half. 26-14

We let ourselves down at the beginning of the second half by allowing Hackney an easy score in the first 5 minutes but otherwise the rest of the half was a tight affair. Changes had allowed us to keep the same intensity but unfortunately we weren’t as clinical, big carries from Josh, Nick and Dan had us break into the Hackney half several times but we were never able to come away with some reward, but we denied Hackney the same opportunities as all 15 players put their bodies on the line with the smaller guys like Colin and Stef putting in the biggest hits. A Hackney penalty 15 minutes from the end set up a tense affair but smart rugby saw us through to the final whistle. 26-24

If the first half was a story of our attacking endeavours the second should be of our last gasp defence that allowed us to hold onto the win.

The support that we got from the touchline was greatly appreciated so thanks to those who came to cheer us on and special thanks to Jennifer for taking pictures of the game. Also big hand to the Hackney guys who hung around for court after the game.