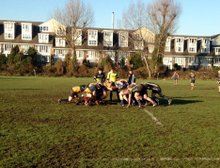 Put on Ice by Hackney

Sometimes better to be lucky then good

Frost had been a bane to Rugby being played this weekend, but with our game the previous week being cancelled we were chomping at the bit to see this one played, and after the result in the reverse fixture Hackney were equally keen to see this game played.

So, a cold and frosty pitch and a lack of rugby for 6 weeks did not make for the best opening 20 minutes that Southgate have ever played, a lack of filling in the gaps and fortunate bounces saw Hackney breakthrough for a couple of scores that made it look as though we may be in for a long day. We finally started playing our game when we strung a few phases together, but it was thanks to the strength of the backline that we were able to get ourselves on the scoreboard. Some excellent running through the middle from Ally, Louis and Taff allowed Chris to get our inaugural score of 2017. Growing in confidence the backs played with even greater freedom, excellent handling saw the ball make its way out to wing to Gabriel who steamrolled his way to the tryline. Despite going into the break at halftime behind in the scoreline both us and Hackney knew there was a lot more rugby to be played.

Having finished the second half blazing the attitude was carried on in the second half, the onslaught continued. With attacking down the wings providing break through's the ball was worked out to Phil S who hopped, skipped and sprinted through 5 opposing players to give us the perfect start to the half. Gabriel who buzzing off his first score for the club continued to blast his way down his wing, it was on one of these intrepid runs that he went the distance to get over the Hackney tryline. Unfortunately, it was disallowed for something, but it had us retain the put in at the scrum, giving us the platform to attack we retained possession on the five and pushed over for Sam to touch down. Gabriel again provided another platform as he chipped and chased, nailing the poor Hackney player who had the misfortune to catch said chip and turned over the ball in the process. Over zealousness in the desire to recover the score deficit, had us put in a few big tackles one of which saw Sam receive a yellow card. Seeing us go a man down Hackney used their numerical advantage and proceeded to score several more Try’s to take the game away from us. Despite making several more attempts on the Hackney tryline we were unable to break through, allowing Hackney to see out the victory.

After a cold, wet and hard game we retreated to Hackney’s strip club esq named bar. Where the drinking was just as good as the Rugby.

Thanks to those who came out and stood on the cold touchline to support and thanks to Hackney for hosting one of the few games of Rugby to take place the past weekend.