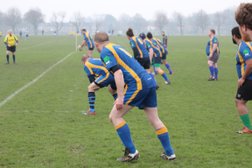 Recent weeks have all had a similar pattern we turn up play well and lose by the smallest of margins. We looked to buck this trend against familiar adversaries Barnet. We were also bolstered this week by the appearance of the returning Perfect, Kieran and Brian which helped stabilise the centres and the efforts in the lineout.

The Opening 20 minutes saw neither side gain the upper hand, with mistakes from both sides it was a very stop start affair. We conceded a series of penalties that had us defending back in our 22, but as proved in the last few games our defensive work was of top notch as we held against the Barnet onslaught. After a period of sustained possession we worked our way up the field and made our own attempts on the Barnet line. They held strong as we crashed against there last ditch defence, but they provided their own undoing as attempted box kick failed to make touch and fell to the hands of Shane who barrelled his way through the defence to score from 22 metres out. Feeling the ascendancy in our game we played with a bit more width as we looked to utilise the wings. But for our second Try it didn't need to go that far, as the ball made it's way to Kieran's hands he showed off his familiar powerful running as he carved through the Barnet defenders to increase our lead.

Unfortunately this is where the report turns sour, as we thereafter proceeded to do a "Southgate". We started the second half far to slowly that saw us make simple mistakes, it was from these mistakes that Barnet managed to capitalise as we conceded two penalties for accidental obstruction and they duly took the opportunity to get some points on the board. We let this affect our mentality as we allowed Barnet to score two easy Try's (one converted) and with it take the lead. After a reminder that we were there to play Rugby and knowing we needed a score, we got our heads back together as we battered our way up to the Barnet line. After several attempts on the Tryline it was finally Aiden who busted through to leave us within a point of Barnet. Unfortunately we couldn't get the conversion and with that we fell to another defeat by the skin of our teeth.

We've been our own worst enemy in recent weeks and we'll look to turn it round for our run towards the end of the league season and into a Cup run. Next week were at home against Old Grammarians, where we look to right the wrongs of the last few weeks.