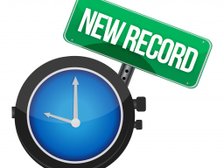 Records tumble in incredible win for The Adders

The 1st XI entertained Langlebury 2's at the Walker ground on Saturday and after winning the toss and electing to bat, they reinforced the skippers decision by compiling their biggest ever league total of 379 for 5 with some truly outstanding batting.

Andy Ferguson (32) and Craig Lyte (41) got the innings off to a flying start, dealing mainly in boundaries as The Adelaide raced to 68 off 10 overs before Andy departed to a good catch low down at mid off. This brought Jake Agar (98) to the crease. Jake has often looked good without ever really kicking on to a big score. Saturday was a welcome change as he worked the ball through mid wicket to great effect. He also cut and drove superbly throughout his innings hitting the gaps with precision. He deserved a century but his day will come judging by Saturday.

A further 29 was added before Craig departed attempting the big shot after becoming frustrated with the tidy spinner form the scorebox end. Next cab off the rank was Tariq Mahmood (114) who once again dazzled us with his array of shots and completed a simply stunning century in only 68 balls! This alone was a magnificent effort but coupled with it being the holy month of Ramadan and not being allowed anything to eat or drink throughout the day the boys were amazed (although we shouldn’t be as he has previous form for this!). Both Jake and Tariq grinded the opposition into the ground and punished even the good balls. They went on to record the highest ever 3rd wicket partnership for the A’s with 221 before Jake departed to a tired looking shot straight back to the bowler. Joe Collard (42) was unleashed with a free license and smashed his score off only 18 balls! When he departed to a snick behind Liam Farrell was left only 3 balls. He duly obliged the willing crowd by smashing the 1st and 3rd balls both for 6 to finish 12 not out from 3 deliveries. There really was no let up on Langlebury to the final ball although they stuck to the task as well as any team could.

With Langlebury needing a whopping 380 at tea to win, the result was really never in doubt but the bowlers still needed to perform. Connor Johnson (7-0-27-1) and Liam Farrell (3-0-27-0) got the innings of to a mixed start to say the least! Both bowling 14 wides each In their spells was unlike both of them but they were producing the odd good ball and one such delivery knocked the opener over as his timbers were rattled by big Frankie creating the breakthrough badly needed. Neil Watts (9-0-50-2) looked better and better with every over he bowled and Raja Abrar (8-1-29-2) continued his great start to the season with another profitable and economical spell. Adelaide took wickets in batches with two of the elder statesman (Mahmood and Morris) even producing direct hits each!! Anthony Morris (4.2-0-26-3) completed the Langlebury innings as they finished 166 all out.

The winning margin being 213 runs was yet another record broken on a memorable day at the Adelaide. This result moves the 1's to top of the table with a free weekend next week. The Adders, The Adders.....