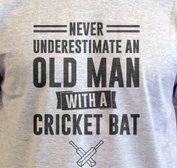 After the Lord Mayor’s show of the Lashings event the day before, it was always going to be a difficult day as the First Eleven returned to league action. A combination of hangovers and tiredness were the theme of the Adders dressing room, although chuck in a broken rib and a damaged medial ligament and it was more War Zone Ground than Walker Ground.

We started brightly. Frankie bashed up the top order on a pitch that was doing a little in the opening exchanges. Liam at the other end also bowled well. However, Australian Frankie Boyle lookalike Houlihan for the visitors, ground it out and kept Johnson at bay. Our Frankie couldn’t shift their Frankie, despite moans to The Chief regarding the amount of short stuff coming their way.

Adelaide were counting the casualties from the day before. Tariq took one on the leg which will keep him out for four weeks, Raja broke a rib the day before and will also be missing for a while and Farrell has done his knee ligaments. Raja could only bowl one over before and Tony the Tiger was down to ten with Tariq stuck at slip. In effect, Nine Men Morris.

Johnson (theirs not ours) came in for the opposition and was severe on the Adelaide bowling. A brisk 60 saw him pepper the Mayfield Avenue fence a few times. Wheathampstead got to 216-9 with Frankie being the pick of the attack with 3-23 off of his 10. Frankie Boyle ended up 83 not out. 216 wasn’t bad with a bowler short and ten men.

So, just over 4 an over at the Walker. What could go wrong?

Canary nicked off, Smiler tried working a straight one and a few others got caught at point cutting. At 60-6, we were about to lose our unbeaten record. Enter Neil Watts, one of the few who hadn’t been drinking the previous day. Firstly with Farrell, they were watchful before Liam chipped back a caught and bowled. Connor came and went and surely the Adders were going to lose at home? Only Anthony Morris and an injured ‘Usman’ were left with 60 odd to win.

However, vintage Whistle appeared and with clean hitting, excellent running from the skip and a bit of good fortune, a perfectly timed innings saw the hosts home with a ball to spare by 2 wickets. Skipper Cresswell bowled well for the visitors but in this 50 over cricket, the lesson of staying in the game and going into a side’s 4th and 5th bowler was vital here. The experience of Watts and Morris got them home.

Not the best performance from Adelaide but when you win when not playing well, then the signs bode well. Maybe a Friday night in soon though, gents?