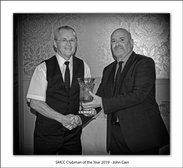 At last weekends award dinner the annual club awards were handed out.

After another great season on and off the field last weekend saw the great and the good of South Milford Cricket Club squeezed into their best bib and tucker to see the handing out of the 2019 club awards. Staged at Darrington Golf Club for the first time. The awards recognised the efforts of players and club supporters over the last year.

John Cain was this years receipient of the Clubman of the Year Award. John has been a long time member of the club in two stints. Now the senior bowler in the 2nd team he offers his guidence to all the youngster coming through. Also a vital member of the ground staff he is often found during the week in the summer at the Swan Croft helping getting the ground ready for the next game.

Many congratulations to all the award winner. A full list can be found below and photos from the night can be found in the gallery section of this website shortly.

Steve Korko 1 off 20 balls against Church Fenton A in the Hare Cup Final at Barwick. A strike rate of 5.00