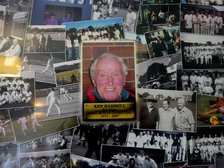 We remember not the scores and the results in after years; it is the men who remain in our minds, in our imagination.
Neville Cardus

It is with great sadness that we report the passing of our former president, Ken Hammill who died last week.

Ken was president of South Milford Cricket Club from 1972 until 2007 when he retired passing the mantle to our current president, Bryan Ransome.
For most of those 35 years, Ken formed a double act with the then chairman Don Bramley, whose term in office almost mirrored Ken's.

His funeral will be held at Pontefract Crematorium next Wednesday 29th May at 12:20 pm and afterwards at Kings Croft.

Parking is often congested at the crematorium so please arrive early to pay your respects or alternatively park at Kings Croft which is only a 6-minute walk down Wakefield Road.