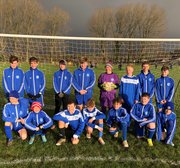 The U13s played a tough game against Shooters today. Shooters scored 2 early goals before Thomas pulled one back within the first 10 mins. Shooters had the better of the first half and scored again to make it 1-3 at half time. The South Newton team put in an unbelievable performance to dominate the second half, showing some of the best teamwork shown this season. Great goals from Oscar (2), Taylor and Theo saw South Newton lead 5-3. Unfortunately, the game was marred by increasingly aggressive behaviour from the away team supporters, coaches and linesman aimed at the referee and the South Newton players. The referee issued 2 straight red cards to South Newton players for minor offenses which left the players and supporters stunned. There was also 14 minutes of injury time played. Shooters pulled 2 goals back leading to a final score of 5-5. We are extremely proud of the South Newton team and supporters for maintaining their high standards of respect and self control today.

South Newton and Wishford FC pride ourselves on providing a fun, safe environment for our young teams to enjoy playing football. Our coaches, players, supporters and volunteers approach each Saturday positively. We encourage our players as well as respect good play from the opposition. We encourage all visitors to follow the same approach and just let the kids play.