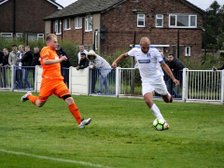 Gamblen and Dodds (pictured) sign whilst Nadine and Robinson return for another Season.

After a number of impressive performances against the Shiners in the last two seasons Tom Gamblen has agreed to join the Shiners. The holding midfielder with a range of passing has caught the eye of Strzyzewski and his management team and after discussions and some pre season friendliest the former Long Eaton player has joined the Shiners

Jake Dodds returns to the club and is awaiting international clearance after Travelling around the World and playing in Australia.