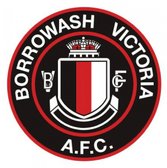 SHINERS PLAY GET OUT OF JAIL CARD

Top of the table South Normanton fell well short of their recent performances and came away from this Derbyshire local Derby with a fortunate point to maintain their unbeaten home record.
Borrowash had their wings clipped in midweek when Kimbeley inflicted the first defeat in six league games and suffered another setback when Brett Peel pulled out of the line up with hamstring problems. The Shiners were missing Danny Roberts and Joe Mansfield dropped into the back four for the only change from the side that demolished Holwell in midweek.
The early stages saw a nervous start from the home side and both sides fought out a midfield battle, but as the game developed Ryan Baker began causing the home defence problems with his tricky wingplay. Massingham and Lyons were pulling the strings and the visitors had the first opportunity to open the scoring on 7 minutes when Smith brought down Massingham . However the striker got up and struck the spot kick against the top of the bar and onto the bowling green. An early let off for the Shiners and Fay began to work down the flanks but getting no joy from the Vics captain Leigh.
Another let off on 25 minutes as Lyons beat the offside trap and fed Massingham who some how fired wide. The deadlock was finally broken on 29 minutes, but it was rather fortunate. The hard working Ryan Baker fired in a shot at Smith after bursting into the box only for the shot to bounce back of the keeper, against Keenan’s shin and loop up into the invited path of Jamie Pawley who prodded into an empty net in front of the home supporters.
Half time SHINERS 1 – VICS 1
The second half continued much as the first, the home team completely out of sorts with wayward passing, and the visitors creating chance after chance. Pawley missed an open goal on 62 with Granger making a herculean effort to clear off the line. More chances were spurned and after midfield changes to the home side were made, they began to build up a head of steam that finally exploded five minutes from the end. Kyle Wadsworth laid a perfect cross into the path of Tommy Leighton at the back post and the ball was headed back into the goal past a helpless Mark Frost.
The game could have gone to the Shiners in a frantic finish, but in truth they were grateful for the point. Mark Frost never made a save all afternoon, but at the other end Smith kept the game alive for the home team. On a positive note Joe Mansfield gained valuable experience at the side of skipper Mottershead and this will stand the youngster in good stead for the future.
Man of the Match – Steve Smith, kept the game alive with some excellent keeping.
South Normanton AFC – Smith, Granger, Keenan, Mansfield, Mottershead, Brandon (Thorpe), Wadsworth, Leighton, Newton, Sims (Garton), Fay (Griffiths). Not used Green, O’Reilly
Borrowash Victoria AFC – Frost, Leigh, Rushby, Jellyman, Fields, Kellogg S, Baker, Stevenson, Lyons, Massingham, Pawley (Akers)
Referee – Mark Tinsley – Jason Haynes – Jon Fones Attendance 63
The next game takes SNAFC to another of the promoted sides, Ashby Ivanhoe, LE65 1TS
Share via
FacebookTwitter
https://www.pitchero.com/clubs
Recent news