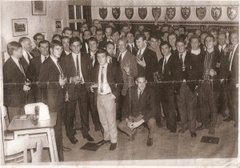 1946/47 – Abandoned at the outbreak of war, Southport resume playing on 6th October when Blackburn are the visitors. Contingency plans had been made to use the Terra Nova ground in Lancaster Road in case the main pitch and clubhouse were not ready but in the event play was possible on the second team pitch even though the uncut main pitch was described as still looking like a hayfield. Only E Loader, a promising young centre pre-war who moved to New Brighton where he played in the pack and won a Cheshire cap as a second-row forward, and Bobby Scott from the 1939 First XV were still playing the game.

1947/48 – The grass on the main pitch was finally cut and the pitch properly prepared and the concrete block wall was built to enclose the ground. On 13th September, when things were still trying to get back to normal, Southport first XV recorded it’s then biggest ever win with 63-0 victory at home to Sefton. The overworked scorer on that day was the Chairman’s son Darrell Farrant who had the job of chalking it up on a makeshift board behind the posts. Darrell had first played for the club as a KGV schoolboy in 1953 and continued to do so, school and university holidays permitting, until 1968, his father having first played for Southport in 1933. R Abram, a KGV schoolteacher, chalked up 119 points for the season. This club record individual tally was to stand for 20 years. A fund was started for the plaque to commemorate members of the club who lost their lives in the 1914-18 and 1939-45 wars. Designed by Mr H D Williams art master at KGV, it is carved in light Austrian oak, with a stainless steel sword and names of the fallen in gold lettering. Three Southport players were selected for the first Lancashire County Trials Match at Broughton Park on October 8, following their good performances against Fylde when the selectors watched the match at Hillside. They are: Bobby Scott, Jack Ormerod and Ken Brewster. It is the first time since 1936 that Southport had been represented by more than one player in a County trial. Scott, at the age of 32 goes on to play for the County later in the season against Cumberland at Carlisle. During the season Southport played 35 matches, won 17 and lost 16 with the other two drawn. They scored 476 points against 334 points,. This was a new club record for points scored in a season. Famous Irish club Instonians visit Southport on tour at Easter beating the home side by a small margin even though their side was well stocked players who had represented Ulster and Ireland.

1948/49 – Future England trialist Harry Foster joins the club, just after the pro licensed bar lobby won the debate. He recalls the team being an unbalanced mixture of returned ex-servicemen and inexperienced school leavers, one of whom would have been future club president Jack Glassberg (1980/84) who played his first game for Southport at the age of seventeen. The fixture list included the likes of Birkenhead Park, Fylde and Liverpool and Southports record “was as tattered as our frail, all amber utility jerseys”. The outstanding personality of the club over the past twenty-five years Alderman Dr A W Limont J.P. retires as President but continues as Vice-President and Hon. Life Member. During his term Alderman Limont represented the club on the Lancashire Committee, and the to him is largely due the strong position and fixture list.

1949/50 – A reported 2000 people turn up at Waterloo Road on 8th September to see a Southport District XV beat a Cheshire XV, with Waterloo internationals R H Guest and G Rimmer representing Southport. The match was held to aid the clubs ground development fund.

1950/51 – Southport recorded their then two biggest ever defeats, a sixty-six to nil pasting from Birkenhead Park, closely followed by an even worse 3-71 Christmas present from Fylde. Otherwise the club was well organized with three pitches and five teams.

1951/52 – Club president was Paul Carter (1949-59), with past and future presidents the two Dr Limonts and Herbert Barber (before being knighted) among the 26 vice-presidents.

1955/56 – Things were a quiet for a few seasons with no notable results or players reaching the county side. On 29th October the final trial for the Lancashire XV was held at Southport, but no club representation. A then unusual sevens format game featuring two under-15s teams from KGV preceded it.

1958/59 – The first XV under the leadership of Gordon Berwick won a record 19 games. This lasted for five seasons. A fund raising match for clubhouse improvements was arranged between a Southport & District XV and Jasper Bartlett’s International and County XV. The Mayor of Southport William Berwick (Gordon’s father) kicked off in spite of him being president of the Southport & District Amatuer Football League. Eric Evans, Dickie Uren, Reg Brazley, Gordon Rimmer and Freddie Griffiths were on view, Vic Tindall refereed and Jim Frazer got the baths ready.

1963/64 – In a record breaking season the first XV under skipper Neil Pidduck won 18 times in 22 games in a total of 21 victories in all. Harry Foster having left for a couple of seasons for Waterloo and subsequently returned plays his last game for the club. The Daily Telegraph reported the last game of the season and described how the veteran Foster had decided to call it a day and retire. A fire had been built for the ceremonial burning of ‘the old warriors boots’, although someone else’s got burnt by mistake instead! Darrell Farrant played in this game, away at Oldershaw he thinks, and rememembers that it was not until the middle of the journey home on the coach that Harry admitted the boots were not his but had been found in the home dressing room!

1966/67 – In September new bathing and changing facilities at the clubhouse were used for the first time. November saw the club change its playing policy and for the first time called teams by names which were noted in The Visiter as First team, Second Team, Sandgrounders, Barbarians, Wanderers, Saracens, and Colts.

1970/71- The club appointed its first ever trainer/coach, schoolteacher Tony Bray after five seasons with Preston Grasshoppers. Andrew Thompson breaks the first team scoring record with 121 points for the season, which he subsequently exceeded. Skipper this season was Alan Havard. Peggy Wainwright, wife of Jack, became the joint first lady vice-president along with Enid Wilson. Sylvia Ratcliffe and Audrey Bretherton also at the heart of things.

1971/72 – Then longest playing member Jeff Windle can remember playing and beating an Orrell 2nd team in the 1960’s. It’s true, but not in the 60’s but on 4th September 1971 complete with a match report in the Visitor. Team mate Graham Thompson recollects “Our finest hour. Not the 1960s as on the club website. Almost 40 years ago. Hope all's well. I know Stuart Fletcher is retired in Havorfordwest but I have no idea what happened to the rest of the team. I remember Dave Richardson saying they had a Lancashire player called Phillips in their centre and that it was the first game he came to watch. He also complained that we (probably me) kicked the ball a lot. We still won, and with Thompson and Windle on the scoresheet!”

1972/73 – The club hosted Lancashire-v-Northumberland on 18th November in the centenary year. A commemorative brochure is published.

1974/75 – Captained by Julian McInerney Southport Colts were the first ever winners of the Lancashire Colts Cup. Team member Keith Rich, now living in Dubai recollects “…. all the odds were against us, we were the underdogs, the teams we played, in the main, were all better than us on paper, except for one thing we played as a team of 15. Not forwards and backs – one team…. All 15 giving 110% made us 17 or 18 young men on the pitch……this was, in my opinion, the main reason we did so well. I believe that if every player plays their part and gives 100+% then “miracles’ can, do and did happen. We often talk today about teams being “hungry” and it is this effort by all on the team that that comes through as “hunger” for success on the day. Win or lose we all played to 100%+ and could have walked off the pitch with pride even if we had lost. Pissed off yes….but still proud…Lastly I remember it being a lot of fun….the whole process in 1975 and rugby in general had a lot to do with the man I am today….still having fun….still very proud of being a Colt back in 1975….still have my 1975 winners tankard…..very battered (handle welded on….that is a story in itself….) from excess use at 20 years of Dubai 7’s……”

1979/80 – The clubhouse was refurbished. Southport win the Hightown 7s

1983 - Australia trained at Waterloo Road for three days prior to their match against The North. Mark Ella the Wallabies half-back star complimented the late lamented Margaret Jackson for her culinary skills by presenting her with a bouquet of flowers. Margaret declined offers of white slavery as Gordon, her husband and then Chairman, had no use for the Dozen Sheep Dowry. In November, with Mark Greenhalgh as captain, the club was voted Junior Club of the Month by Rugby World. On 6th November a Presidents XV plays a Blowick Rugby XV for the Colin Houghton Memorial Trophy.

1985/86 – Alan Havard is instrumental in setting up a Mini and Junior Section.

1986/87- The club organises its first Mini and Junior Tournament on 20th April.

1987/88 – The first team play in Courage League NW1. Stuart Wilson became club president. After 38 years, one of his predecessors (1980-84), Jack Glassberg plays his final game for Southport at the age of 55.

1991/92 – Boards commemorating past Captains and Presidents unveiled above the clubhouse bar, where they remain, by Alan Havard and Stuart Wilson. Keith Shorrock admitted that the work had been frequently discussed, but until now had never been carried out. He paid tribute to the work of immediate past chairman John Winn, in helping to fund the project, and to Barry Sillitoe for the s history research needed to ensure the information was available to plot the club’s history. The Club Tour is to Brittany with wins against St Malo (12-11) and Rennes (44-0).

1995/96 – The first team, captained by Roy Beetham won 69-0 away at Halton, then the biggest win in living memory. Southport Womans rugby team formed.