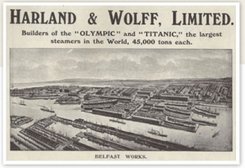 The 1972 centenary brochure (now available to read and download on this section of the site) benchmarked the first hundred years of the club against many infamous, and not so infamous events such as the first typewriter being displayed at the Southport Royal Hotel, the passing of the Red Flag Act for men to walk in front of cars, Eiffel finishing his tower, Jack the Ripper, Edward VII succeeding Victoria, Prohibition in the USA, first Mersey tunnel opened by George V, Edward VIII and Mrs Simpson…..and the Titanic disaster

The rugby club was well into its fortieth year in existence when in the early hours of Monday morning 15th April 1912 Titanic on her maiden voyage sank within three hours of colliding with an iceberg the evening before. By the sound of things the club wasn’t a happy ship either as the archives record that it was possibly the worst season in the clubs history! Apparently no win had been achieved until March, and only a paltry 38 points were scored against 293 conceded.

At this time the club was known as Southport Olympic RFC and played at Victoria Park. Sir George Pilkington was president and J. Wilson captain.

This is documented in the various history pages within this section but whilst there is nothing directly relating the club to the disaster you may find the following trivia of interest in light of the publicity the centenary generated in the media:

• The sister ship of Titanic was Olympic (both were owned by the White Star Line who’s ships names ended in ‘ic’). I doubt that this was in deference to the existence of Southport Olympic especially as, unlike her sibling, the name didn’t go down well with members of the club who ultimately voted to change it in favour of plain Southport Rugby Union Football Club at the AGM the following season. However, it does provide us with an excuse to celebrate another centenary on 22nd April 2013! The rugby club has well and truly outlasted Olympic too which was ingloriously scrapped in 1935.
• The family name Rostron has been synonymous with the history of the rugby club over the years, no more so nowadays than the redoubtable Peter and Pat. They may be intrigued that Captain Arthur H. Rostron R.N.R. (any relation?) commanded the Cunard owned ship Carpathia (Cunard ship names ended in ‘ia’) which rescued 868 survivors from the lifeboats. Apparently many a Rostron has been heard at the club house bar reminising that they used to work for Cunard. It is also surprising that all Liverpool based shipping lines didn’t have ships names that ended in a mandatory ‘ra’.
• The link between Titanic and icebergs is forever embedded in folklore. Likewise Southport RUFC and Glassbergs! Brothers Jack and Eric Glassberg first played for the club in the post second world years, Jack becoming a club legend as the possibly our oldest and longest serving player. In 1988 he eventually hung up his boots after 38 years, playing his final game for Southport at the age of 55. For good measure he was also president between 1980 and 1984.
• I wonder if any of the Southport Olympic players indulged in Turkish baths or massages? If so they may have been putty in the hands of Titanic crew member Walter Ennis who was engaged on the ship as a Turkish bathman and masseur having been previously employed in a similar position for about six years by Smedley Hydro, Birkdale. Well known Bedford Road incumbants the Astwoods and Dales may be interested that had they resided here a hundred years ago Walter Ennis would have been a neighbour as he lived with his wife and family further up the street at number 141. Apparently his wife was not anxious for him to take the position, but he preferred to take on what he considered a better appointment. Sadly this was not to be the case as despite being a very powerful swimmer he was tragically lost and his body was never found.
• In April 1909 Southport Olympic welcomed a touring side from Sydenham, Belfast, the away side triumphing 11-6. Although there is mention on an Irish rugby history site of a Sydenham rugby club it appears that like the ill fated ship the club sadly disappeared many years ago . However, Sydenham is a place which exists in East Belfast next to the Queen’s Island site of the Harland and Wolff shipyard where Titanic and Olympic were built. In those days the yard employed 15000 locals, 3000 of whom worked on building Titanic, so the chances are that most of the Sydenham players would have been working there in some capacity. As the keel had been laid on March 31st 1909, just before the tour to Southport, some of them may have actually been involved with Titanic itself. In which case the Visiter could have published the match report under the prophetic headline ‘Olympic sunk in Titanic Epic!’ or something like?
• A century later there is still a tenuous link between the club and the birthplace of Titanic as Southport and Ulster have something in common. Both the rugby clubs bearing the respective place names wear KUKRI kit with pride. And the weekend before the anniversary of Titanic was equally dramatic for both! Ulster Rugby beat Munster 22-16 in Limerick to reach the semi-final of the Heineken Cup for the first time in 13 years, a gigantic result bearing in mind that the home team is vitually unsinkable on its own patch. Likewise on the this side of the Irish Sea, in fact almost in it, Southport RFC 2s triumphed 32-10 at Millom 2s who hadn't been beaten at home for at least three seasons leaving the 2s needing two victories to sail away with the league title.

Whilst the ragic loss of Walter Ennis and over 1500 others should not be forgotten in all this, relating the event to the the history of Southport RFC gives us an opportunity to reflect on the rich and hard earned heritage the club has in place, and which cannot be taken for granted.