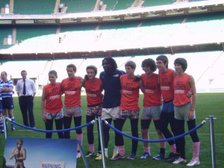 On a balmy September day back in 2009 a tag-rugby team christened for the occasion Too Hot to Touch proudly represented the town and the club at an unforgetable day out at HQ. The team comprising seven members of that seasons Southport RFC u-16 squad surpassed themselves in winning the O2 Scrum on the Beach Plate competition on the hallowed turf, the first players from Southport RFC ever to do so.

The team was Jordan Caldwell (captain), Daniel Bernard, Hugh Ellis, James Russell, Daniel Whalen (all Birkdale High School), and Tom Peacock and James Rickers (Christ the King). They had organized themselves to play in the O2 regional event held at Waterloo Road earlier in the summer. Nattily kitted out in orange vests, black tights with multi coloured boxing shorts and pink socks THtT gave a great account of themselves and were nominated by England international Paul Sackey as the the team displaying the best rugby style, both on or off the pitch.

This was judged on the basis of style of play, look and attitude, the reward being invited to take part in the final O2 event at the home of England rugby hosted by former International and Waterloo player Austin Healey.

What a day it turned out to be! THtT were one of twelve teams from across the country treated like royalty by O2 and the RFU, being given a full-on experience of everything the magnificent Twickenham stadium has to offer as a player, and as a spectator. The team used the England dressing rooms, were warmed up by Healey, announced onto the pitch big match style, sang the national anthem and played six games on the hallowed turf.

The twelve teams were initially placed in three pools of four: THtT convincingly won the first two games against teams from Cumbria and Great Yarmouth before losing to eventual cup winners Maldon (who seemingly brought their entire first team squad!). Finishing second in the group saw THtT qualify for the Plate were they duly beat teams from Grimsby and the East Midlands before the final “winner takes all” game against Dorchester. A memorable, heart attack inducing try in the last second from Daniel Whalen secured a 3-3 draw and saw THtT win the group, and the Plate on a superior try difference.

At an after match buffet the Plate turned out to be a unique framed England shirt which Paul Sackey presented to the team. THtT has donated it to club where it now is proudly displayed in the club house for all to enjoy.

THtT, with their body hugging boxers, certainly weren’t swinging low at the home of England rugby that day I can tell you, as a certain Bill MacClaren would have said. A very proud day for all concerned.