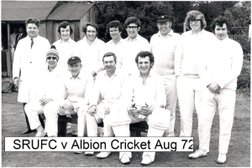 The evening of Friday 9th August 2013 saw the inaugural Havard – McQuaid Challenge Cricket match between Southport Rugby Club and Southport Hockey Club. The Trophy was named after Alan Havard and Neil McQuaid who have given together over 80 years service to the Rugby Club and S&B Sports Club respectively.

Southport Hockey Club batted first and following some impressive batting from captain Andy Gray,Tony Ferns and Andy Ferns accumulated an excellent total of 141 runs from the allotted 18 overs.In repines the Rugby Club team got off to superb start with James Owen and Neil Crew enjoying an opening partnership of 95 before rugby hero Dean Skelton peperred the local gardens with a flurry of sixes which saw the Rugby club winning the match with an over to spare.

The match was extremely competitive but played with great spirit and expertly umpired by George Ball and was supported by a well attended crowd. Both sides have now agreed that this will become an annual fixture and the creation of a new tradition.

The evening was then celebrated further when a pair of rugby boots and a hockey stick were ceremoniously burnt to provide ashes to accompany the trophy for all future matches.

Rugby Club Chairman Andrew Carney commented "This was a great evening and an excellent example of local clubs working together to promote sport in the town.Our thanks go to the Players,Umpire George Ball and the Southport & Birkdale Sports Club for hosting such an enjoyable match"

This is thought to have been the first-ever cricket challenge match between the two clubs. Relationships go back a long way, S&B tracing its history back to 1859 originally as Southport Cricket Club then Southport Alexander Cricket Club playing at Manchester Road which in 1872 also became the home of the rugby club when it was formed in as Southport FC. Both clubs moved on when the ground was sold for housing undergoing varying fortune, mergers and name changes, the cricket club amalgamating with Birkdale Cricket Club in 1902 which was already established at Trafalgar Road.

Southport Hockey Club moved in too in the early 1900s to be later joined by Birkdale Lawn Tennis Club and S&B Squash. The various clubs co-existed on the same site until amalgamation as S&B Sports Club in 1999.

Many Sandgrounders have proudly represented both S&B and Southport Rugby Club over the years, none more so than current S&B President Neil McQuaid who captained the rugby club Third XV back in the 1960s and 70s and SRFC Chairman Andy Carney. The tradition continues today with the likes of Dean Skelton, Logan Weston, Jack Morris-Holland, Charlie and Jack Carney, and many others proudly wearing the shirts of both clubs.

This was not the first time the rugby club has put out a cricket XI. The photograph was taken in 1972 when Southport RUFC (as the club was then known) proudly took to the field to take on Albion CC only to be soundly walloped by 69 runs, the rugby club mustering a paltry 76 all out in reply to the host teams 145. The team that day as shown in the photograph was: rear (L-R) Bob Radcliffe (umpire), Howard Taylor, David James, Dave Keely, Andrew Thompson, Stuart Wilson, Bob Brimcombe, Phil Evans; front L-R) John Rostron, Jack Wainwright, Dick Bretheron, Geoff Pearson.

John Wainwright who's father, former SRUFC President Jack, is second right front row in the photograph recalls "From memory I think the history is that Albion CC played their cricket at a cricket and tennis club based at The Rookery off Roe Lane in Churchtown. We used to walk the family dog there as it was close to where we lived on Wennington Road and Jack would play a few games of tennis there in the summer.I think every year they held a cricket match against the rugby club and I can once remember going to see the match."