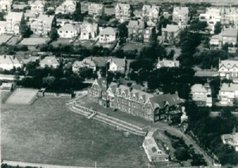 Towards the end of the 19th century the growing township of Birkdale had become an established location for preparatory schools. This tradition continued with the opening, in 1902, of Terra Nova a private boarding school for boys on a site fronting the then undeveloped southern section of Lancaster Road leading to the then club house of Birkdale Golf Club links (the club didn’t become ‘Royal’ until 1951).

The relationship with Southport Olympic RUFC probably goes back to the origins of the club as one of the schools specialities was preparing boys for public schools. It virtually guaranteed success in the Common Entrance Examination to Public Schools, and it was many years before a Terra Nova boy failed at this hurdle.

The imposing building was set in five and a half acres of playing fields, it’s green and white cap conferring status on the wearer as a pupil of a high-class preparatory school.

In September 1939 the head teacher Tommy Brown was instructed by the Government to open an envelope which had been sent to him months earlier, marked ‘Strictly Secret: Not to be opened’. The mysterious letter read: ‘In the event of war, the school will be requisitioned by the Government’.

‘Terra Nova’ was taken over by the Central National Registration Office [CNRO] in 1939, and used throughout the Second World War as a Records Office. Waterloo Road had also been requisitioned during this period and in the season after hostilities ceased the club made contingency plans to use the Terra Nova playing field in case the main Waterloo Road pitch and clubhouse were not ready but in the event this was not necessary.

The head teacher had faced the task of finding a replacement building for the school in 1939, but within a week he had found a disused country manor house near Holmes Chapel, Cheshire, which fitted the bill and three weeks later Terra Nova School was relocated there, where it still remains.

The former school buildings in Birkdale were put up for sale after the war ended and the Liverpool School for the Deaf put in an offer to purchase for £50000. Although it was accepted in 1946, it was another two years before the site was released by the CNRO. The school changed its name to the Liverpool School for the Partially Deaf and it was officially opened by the Earl of Derby on Saturday, 11th September, 1948.

Sadly it closed for good on 23rd July 2003, and the building and in 2012 the site and buildings lie derelict awaiting redevelopment.

Although Terra Nova was a boarding school may pupils appear to have been local and remained or returned to Southport and to have played for the club. In the 1919/20 season there was first mention of an annual Boxing Day match between Southport RUFC and Old Terranovans which became an annual festive fixture until 1938. The Southport Visiter reported:

The Mayor, Councillor H. W. Barber, an ardent “rugger” enthusiast, faced trial by camera when he kicked off the game in December 1936 and that a number of pretty nurses from the Infirmary were also on the ground, but their presence was not really a precautionary measure – it was only a friendly match! However, they took a collection for the Infirmary funds which realized £5.

Every Boxing Day the club played Old Terranovans, but Southport were usually at some disadvantage as up to six of our players could end up wearing OTN jerseys.