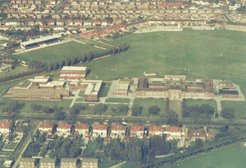 The ex KGV pupils listed on the Club War Memorial Plaque are symbolic of the special relationship which exists between Southport Rugby Football Club and KGV in their various guises over the years. It is a relationship which means an awful lot to people connected to both, whether still living in the town or having settled further afield. This enduring bond is set to continue into the future as the many of the Senior and Junior Colts players are students at the College and, as in years gone by, wear the rugby shirts of both institutions with pride. There is no doubt though that the School though evokes many emotional memories of long lost years and contemporaries representing the heartbeat of the town.

Southport Municipal Secondary School for Boys was founded in September 1920 and occupied a building named 'The Woodlands’, along with some disused Army huts, at the north end of Lord Street where the Law Courts now stand.

There were 110 boys in the School and the Headmaster was George Millward M.A. assisted by six teachers, Messrs J.Charnley, J.Edwards, A.T.L.Grear, G.C.D. Mason, J.W.Rogers and T.P. Spencer. Six Houses were formed to cater for the individual supervision of boys' progress, as well as for social and athletic purposes. They were: Edwards', Grear's, Mason's, Rogers', Spencer's and Woodham's.

A few years later the school moved to a site near to the ground which the rugby club had occupied twenty years before.

In September 1926, new buildings in Scarisbrick New Road were completed and, on October 16th, Lord Derby formally opened King George V School. It grew steadily to accommodate over 500 boys by the end of the 1920s and two further Houses, Evans' and Leech's brought the total to eight.

In the 1930s, King George V School's reputation grew steadily, both academically and in other ways. During the Second World War, Bootle Grammar School's staff and pupils were evacuated to share the KGV building.

George Millward retired in the Summer of 1949 and was succeeded by Geoffrey Dixon M.A. Under his leadership, the School continued to flourish and to strengthen its fine academic reputation. The size of the sixth form grew significantly from 123 in the late 1940s to 218 by the end of the 1960s, and the number proceeding to universities, particularly to Oxford and Cambridge, more than doubled over the period leading up to the School's Golden Jubilee in 1970.

Geoffrey Dixon's successor was David Arnold M.A., during whose tenure the School changed its status to become King George V Sixth Form College in September 1979. At this time there were 750 on roll; 350 boys in the third, fourth and fifth years of the Grammar School, and 400 Sixth Form boys and girls, the latter transferring from Southport High School for Girls. The twelve Houses were absorbed into four Divisions.

During the sixty years of its existence there had been three Heads, five Deputies - George Mason, Joseph Edwards, Ike Higham, Les Hargreaves and George Wakefield - but only two Headmaster's Secretaries - Elizabeth Craig and Jean Buck. George Wakefield was one of five Old Georgians on the staff during that period, the others being Hubert Long, Bob Abram, Stan Rimmer and David Miley. The School started with a staff of seven and ended with 50, and the roll grew from 110 in 1920 to 851 in 1977. In 1978 intake at 11 years of age ceased.

King George V School ended its life in 1982 and was demolished the same year. The buildings had suffered progressive structural movement due to the poor ground conditions and as parts were rendered increasingly unsafe they were closed down until only a fraction at the western end was still in use.

As mentioned the site chosen for the new school in the 1920’s was very close to the Scarisbrick New Road ground that the club, then known as Southport Olympic Rugby Union Club, played at between the 1880’s and 1906, the club’s second home. Further information on this ground is included in the section on the Grounds of Southport RFC.

This came about after the original Southport FC adopted association football in 1881 and played at an adjoining ground on Scarisbrick New Road before moving to Ash Lane, now Haig Avenue, backing on to the new school playing field in the early twentieth century.

Nevertheless it took some years before sport became properly established at the School as until 1935 when the Gymnasium was built it had no specialist PE staff. But three masters ably led by H Higham, with H Evans and C W Whittaker, had taken already taken charge of the Rugby teams, laying the foundations for the schools reputation to be underlined in the future when Old Boys Sam Perry and Gordon Rimmer were selected for to play for England, Sam also featuring for Southport on occasion, likewise Harry Foster, who had England trials.

Mr Evans, who taught at the school from 1929-67 recalled in the King George V Golden Jubilee 1920-50 edition of the school magazine The Red Rose that the boys used to play Rugby touch on the playground and soon became highly skilled in passing the ball, timing passes to a “nicety”. Despite the early difficulties school rugby improved greatly and in the early thirties a team with the Pennell brothers beat the redoubtable Cowley School from St Helens.

He also recalled the “Bantams” and “Chicks” – Junior Rugby teams which introduced young boys to competitive Rugby and prepared them for second and first XV’s later in their career. The “Chicks” used to play Bishop’s Court School at Freshfield and Terra Nova in Birkdale, the “Bantams” playing other “Bantam” teams of schools in Merseyside and West Lancs. He remembers Messrs Perry and Rimmer playing for these junior teams.

Special mentioned should also be made of well-loved former chief coach and club chairman of Southport Rugby Club John Porter, known to everone as “Mr Rugby”. John lived and breathed the game, his love for it having begun in his home town Wigan where he played Rugby League on a Saturday morning, and Rugby Union in the afternoon. On moving to Southport as a teenager he attended Meols Cop High School but, as it did not have a rugby team, he was given special permission to 'hop over the fence' to play for KGV, apparently the only person ever to do so.

KGV was the only school in the town to teach rugby, from which a thriving Old Georgians rugby club evolved.

In 1931 Old Georgians were captained by R A Lloyd, who later captained Southport in 1939.

On 23rd May 1936 Old Georgians amalgamated with Southport bolstering the clubs playing strength and in December that year a match was played between a Southport club side and a scratch Old Georgians side, including many club members. It became established as the traditional annual Christmas fixture for many years to come, taking over from Old Terranovans.

Construction of the new KGV College building commenced in 1976 and although the first intake of new students entered in 1979 it was not completed until the early 80’s.

In the September of 1983 David Arnold was succeeded as College Principal by Geraldine Evans B.A. under whose leadership KGV continued to grow and to develop new subject courses for the increased student numbers, for whom further buildings were commissioned. By this time, the College was building a reputation for excellence, just as its predecessor had done.

On Mrs Evans' retirement in 1991, Hilary Anslow B.A. M.Ed. was appointed Principal. During the 1990s KGV College became a corporation, making it independent from the local authority since when full time student numbers have risen from around 700 to almost 1200, necessitating larger premises.

In 1996, an exciting building project was commenced, and the new Millennium Centre at King George V College was formally opened in the summer of 1997 by Lord Derby, whose grandfather had presided over the opening of King George V School in 1926.

From September 1996, Adult Evening Classes were offered at King George V College, many of which were based in the new Millennium Centre upon its completion. KGV has now become a popular adult learning venue, particularly for courses in information technology.

Since the start of the 2010 season the rugby teams at Southport and KGV wear shirts in the traditional KGV maroon provided by one of the towns great benefactors, Bernard O’Malley of Nationwide Produce. This is another strong link between two of the town’s best known institutions, even more so as many of the players turning out for the Junior and Senior Colts teams for the Club on Sunday afternoons also represent the College on Wednesday afternoons.

Tom Bristow reported as follows in the Southport Visiter on 8th October 2010:

"RUGBY players at KGV College will start the season with a new kit thanks to sponsors Nationwide Produce. KGV said they were “thrilled” to have made the link with the Southport-based food giants. And Bernard O’Malley, Group Chairman of Nationwide Produce described the new kit as “fantastic”. KGV’s rugby coach Neil Smith added: “I would like to thank Bernard from Nationwide Produce on behalf of all the team. The new shirts are fantastic and are just what we need in preparation for another successful season”.

Are you an Old Georgian and have a story or memorabila about Southport RFC to share? The club extends a hearty welcome to you to come down on match day, or even better a few of you together!

Likewise former pupils of Birkdale, Christ the King, Ainsdale, Meols Cop, Stanley, Merchant Taylors, St Marys College etc. as a section on the links between Southport RFC and schools, maybe junior schools too is to included in the future.