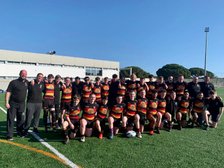 Southport Junior Colts came up with a super win away from home against Fylde from the division above. In atrocious conditions both sides showed great skills in ball retention and control. Fylde opened the scoring with a well taken try to the left of the posts after moving the ball swiftly along the line. Conversion missed. Southport soon equalised with a great solo try from Jack Cook. He took a great pass from scrum half Michael Lawton and side stepped past 4 defenders to slide over near the posts. Conversion missed. Fylde then posted 2 converted tries to lead 19-5 and the writing looked on the wall for Southport. However, Dan Huggins playing in the centres had other ideas. He crashed over just before the break to reduce the scores, with Fylde leading 19-10 at the break.
In the 2nd half with the wind and rain in Southport's favour, the comeback began. Some great forward play from Aaron Lang, Tom Hendry and Tom Lawson saw Fylde pinned in their own 22. Twice Southport were held up over the line, but they weren't to be out done. Again the busy number 9 Michael Lawton recycled the ball to Dan Huggins who crashed over for his 2nd try of the game. Conversion missed. Southport's 10, Louie Southwood danced his way down the field and with the fullback to beat, he was finally dragged down by a covering tackle. Once again Southport took their time and great carries by Harry Boardman, Dan Middlehurst and Ellis Hardy we finally moved the ball wide. Ollie McKeown chimed in from full back to scoot over in the corner and unbelievably, Southport led 19-20.
The final 10 minutes was backs against the wall time but our defence stood tall. Big tackles from Ivan Rullan, Dan Middlehurst, Ollie Rogan, Ollie McKeown and Cookie forced Fylde into a number of errors. Fylde were camped in our 22 but couldn't breach the defence, Roman Attridge pulling off some great tackles at the breakdown. Finally after great pressure from Louie Southwood, Fylde knocked on once to often and the ref blew up to end a wonderful game of rugby.
Credit to both sides and thank you Fylde for your hospitality.