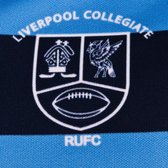 On a crisp late November afternoon, Southport welcomed Liverpool Collegiate last Saturday, and despite in parts matching Collegiate, who came to Waterloo Rd unbeaten in eight games, ultimately lost to the better side on the day.

It took a while for this match to find a rhythm as the teams struggled to play the open rugby that they both were keen to display. Instead a series of penalties were awarded to both teams for a variety of offences presented opportunities for Southport outside half Jake McMullen and Chris Lloyd, the Collegiate captain, to slot over two penalties apiece.

With the match in the balance, and neither of the packs gaining the upper hand, Southport did have their chances to open the try scoring, the best falling to Chris Drescher, who was unable to recover his kick and chase before being beaten by the dead ball line.

As the first half drew on, Collegiate themselves had a period of pressure on the Southport line, and a combination of Collegiate choosing to spin the ball wide, and missed tackles from the Southport defence saw centre Lloyd score in the corner and take the lead.
From the resulting kick off, Southport were awarded a penalty from long range which was well converted by McMullen. However, Collegiate responded immediately when the impressive Lloyd took four Southport defenders with him over the line and still managed to turn and ground the ball for a 9-16 lead at half time.

This late score seemed to rally the south Liverpool side, and from the start of the second half Collegiate looked to spread the play wide on every opportunity, attacking down the left flank, and then quickly spreading the ball wide to the right, allowing their winger to find the extra space and score in the corner.

Southport continued to press in possession, and runs from Sam Cross and powerful tackling from Danny Booth kept ‘Port within reach. However, with Southport pressing on the half way line, Collegiate were allowed to enter the ruck from the side, and the ensuing quick turnover ball provided a clear run in for the left winger and effectively ended Southport’s chances of getting anything out of the match. Collegiate reaffirmed their dominance in the match with two more tries in quick succession, one in each corner, highlighting their expansive style and ability to finish.

To Southport’s credit, they persevered to the end of the match, and were rewarded after a quick tap penalty found Gareth Lang who drew the Collegiate defence; the drive from the ensuring maul saw James Smallwood come up with the ball as the scorer of a consolation try. However, the plaudits should go to Collegiate who were the deserved victors and continue their battle with Manchester Medics for league supremacy.