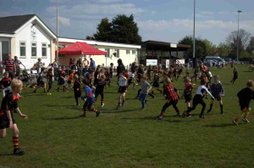 “Higgysmith” Cup, Sunday 20th December 11.30am (ish) by Dave Hignett
U6 coaches and parents 5 : U7 coaches and parents 4.
After the children had shown the parents and coaches to play rugby, they went for a well deserved rest on the sidelines to see the adults show how not to do it. This supposed tag match was refereed magnificently by the very handsome Director of Youth Rugby Mike Dale. The two teams led by Ian Smith for the 7’s and Dave Hignett for the 6’s had just completed a strenuous warm up routine.
With the teams settled on, they both had 12 a side, when Ian Smith decided to play his first controversial move by stealing first team captain Gareth “puggsly” Lang. All were excited and having just seen the world cup knew they all had a chance of being called up in the new look England set up if they could shine. The rules were simple no contact and get the tag.
The whistle went; Ian smith started with the ball, and after an accidental collision with Dave Hignett, picked himself up from the floor. Ian then decided that the game would no longer abide to the strict rules of Tag. The pace was frantic, the quality poor as it was left to the men in the middle of the park to serve up a treat of tag rugby. Mark Warren ran onto a pass 1-0 to the 7’s. Not to be outdone with some crisp passing and a bit of the deck Ian Tindall 1-1. Ian Smith then ran through to get the ball only to find he couldn’t move although his exit was clear as his collar had mistakenly got trapped in Dave Hignett’s hand, the ball spun lose and was picked up by Joanne Gorman, who finished superbly 2-1 to the 7’s.
Restart and a midfield battle, the look on some of the parents faces as the realization that this was no longer a game of tag was superb. Wolverine “Woody” Morris decided that the wing was no longer a place for ladies, decided to put her face where other feared to put there feet, which set up a potential Dave Hignett try, and although he dived In the field of play, ended up some 30 yards off the pitch with many a U7 coach attached. The strength to throw some one that far, purely by holding their Velcro tag was amazing.
Simon Atwell, showing the ladies his legs, made a glorious run TRY scored; we think however that Simon is still running. Half time 3-1 to the 7’s.
Quite fairly “puggsly” returned to the U6’s rank wearing his multi coloured plimsolls for the second half, and the game turned. Some strong running from Jon Thompson in midfield (which has now persuaded him to join the senior ranks) brought the game back to 3-2. Chris Morris’s Dad from U7’s restored the 2 point lead 4-2 and if Ian Smith had managed to keep both tags on would have put them out of reach, however when you are down and nearly out a hero must emerge, and out of the Ashes, defying her 21 years came Anne Shorrock. With side stepping to impress even Shane Williams Anne brought the game back to 4-3 to set up a thrilling climax.
Ill discipline from the U7 head coach led to the magnificent Mike Dale, awarding a deserved penalty to which Dave Hignett’s length of the field 24 inch barnstorming try 4-4, 1 minute to go.
The ball must have nearly touched the sun as Troy Bailey dropped the hotcake with the line gaping, the ball was bouncing when Paul Owen picked it up and scored the winner. The 6’s win!!!!!
Rightly so the star of the week and player of the match was Anne Shorrock. A fantastic day, enjoyed by all - Rematch anyone?
Share via
FacebookTwitter
https://www.pitchero.com/clubs
Recent news