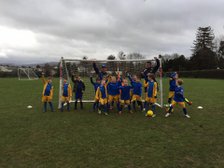 A first ever match for most of our U7 Cubs and a great way to start!

I think it’s fair to say that the kids were fairly excited about playing this match; not to mention the parents! Thank goodness the weather was kind to us, I was dreading having to break the news should the game have needed to be called off!

A few of our Cubs had played in a U6 tournament at the end of last season, but for most it was their first experience of ‘competitive’ football – and I’m sure after this experience, they will be hungry for more!

We did a ‘round-robin’ for the day, with 3 teams from Prestbury, plus the Lions & Tigers from Southside, so in effect the Cubs got to play 4 games.

The Lions coach for the day was yours truly, and in the Lions team we had Oliver V, Alex, Josh (on loan from our U6 Cubs), Andrew, Jesse, Rupert, Jack, Ruben and Ashton.

The Lions got off to a flying start and soon were 2 goals to the good, with excellent finishes from Jesse and Alex. Ruben and Josh both had chances to add to the lead, but it was Prestbury who finished the stronger, with Rupert playing as sweeper keeper a number of times to snuff out any danger, although he was beaten just before the end from close range following a scramble.

They continued their winning run in game 2, when another fine goal from Alex proved to be the difference between the 2 teams, although in truth we were pretty dominant throughout. Jack and Ruben were both excellent at harrying and chasing, with Alex breaking-up play at the back and bringing it forward, and in truth we never looked like conceding.

The toughest test came in game 3, which was against the strongest of the 3 Prestbury teams. They had a couple of big, strong boys, but the Cubs were undeterred, with Oliver and Ashton very strong in defence and Jesse looking dangerous every time he had the ball. Rupert had showed some silky skills on more than 1 occasion and it was him who eventually settled the game with a sharp close-range finish.

On to game 4, an all-Southside affair. Could the Lions make it 4 wins out of 4? As you can imagine, this was the keenest fought game of them all, but it was the Lions who were first out of the blocks and were soon 2 goals in front, with 2 quality finishes from Josh. He almost made it a hat-trick, but his thumping drive was somehow kept out by Alfie! The Tigers fought back strongly and the Lions needed to defend for their lives! This was Andrew’s best game, with instructions simply to ‘go get the ball’! Enrico pulled a goal back for the Tigers, then in the very last seconds of the game was clean through on goal and seemed certain to score, only for the ball to trickle agonisingly wide of the far post, meaning the Lions claimed the bragging rights and a clean-sweep.

Player of the day for the Lions was Josh, belying his age and size to out-compete much bigger boys, and a cool finish for both of his goals.

The Tigers coach for the day was Brad, and in his team he had Marco, Joseph, Ed & Luke (more U6 loanees!), Enrico, Sam, Adam, Alfie and Riado.

The Tigers started with 2 draws, with Marco keeping a clean-sheet in the first, ably assisted by the Sutton twins, who gave no quarter in defence, as we knew they wouldn't! The 2nd game finished 2-2, with goals from Marco and Sam, and by all accounts that was just about the correct result.

The 3rd game ebbed and flowed, with Luke stealing forward to put the Tigers ahead, who then came under pressure from the opposition, with Adam and Alfie working tirelessly and Joseph in goal tidying up on several occasions. Marco made the game safe with a thumping strike, although Prestbury did pull one back just before the end.

The final game was the thriller versus the Lions as already described above, where they couldn’t quite complete the comeback their overall performance probably deserved. Riado was definitely up for this one and did his best to make his pre-match prediction that the Tigers would ‘smash; the Lions come true, but it wasn’t to be.

Again, good performances from everyone, so hard to pick out a man of the match, but Marco took the honours for his 2 goals, for an overall powerful performance, and even having a clean-sheet for the game he was in goal!

On final reflection, we couldn’t have asked for any more from our Cubs, they really played their hearts out, played some good football too, and most importantly, had a great time doing it!

Please meet at Pittville School at 9:30