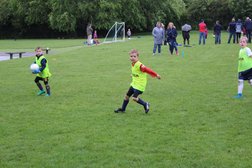 The first ever game for our U6 Cubs!

To say the U6 Cubs were excited about their first ever game was a huge understatement, so it was a huge relief that the game was able to go ahead, despite a late weather scare.

We split the Cubs into 2 teams for the day, the Tigers and the Lions, with both playing games against the 2 teams from Gotherington.

Managing the Lions was Matt Arthur and in his team he had son Josh, Sam, Caleb, William, George, Luke Smith, Jacob and Ralph. In the first game it sounds as though the Lions overall had the better of it, but couldn't make it count where it matters most! Sam did eventually get on the scoresheet, to score the first ever goal for the U6 Cubs.

It seems the Lions got off to a slow start in the second game, but rallied well to score twice through William, who I'm told had an excellent game, and Josh. A couple of soft goals against us near the end ultimately cost us, but it had been a very good comeback.

I'm told that the whole Lions team did very well, but Luke took the man of the match honours for his 'amazing energy and tackling'. Special mention to Caleb too, who was very strong and showed what a powerful kick he has!

Managing the Tigers we had Mike Fogden and in his team he had son Henry, Noah, terrible twins Ed and Luke, Harry, Arlo, Rafa and Freddie.

A slow start for the Tigers in the first game, but they too rallied with a goal from Luke, in a game that was closer than the scoreline suggests. Luke then scored again in a very tight game 2. From what I hear, everyone played 'brilliantly', with Luke taking the honours for his 2 goals and all-round performance.

All the feedback I had regarding the games this morning was very positive. It seems the boys all played very well, but even more importantly, it seems they all had a great time. Today was all about the experience for them, and they get to do it all again on the next 2 Saturday's too!

Please arrive at 9:30, so that the Cubs can be sorted into teams and warm-up