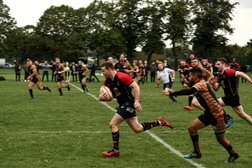 Southwark through to next round of the cup

Southwark have some bitter memories of the cup having dismally lost 3-0 to Dartford Valley under the lights at Sidcup last year. Those ghosts were exorcised on Saturday as the chastened Crusaders were sent back to Cliffe with dreams of a cupset over after a bruising encounter with the Southwark defensive press.

There were the usual changes made throughout the team. In the pack, Tom Swierkosz slotted back into the front row for his first start of the season. Matt Hunt and Toby Findlay continued their promising second row partnership. Alex Mulchrone made his first team debut at 7. In the backs, Jason Evans made his debut at 10, Kev Kopisker made his first start at 12, Jack Hooper and Rob Waugh came in at 11/14 – the bus continued to be parked at 15. Ryan Thomas was also set to make his competitive debut from the bench.

A focussed warm up sharpened minds for the game. Initial reservations at the size of the opposition were assuaged by Hugh pointing out that he too had been to the gym - although worries remained about how anyone was going to score a try without a Pete Horan through ball. A moving team talk was delivered by Sam Lamont and away we went.

The first twenty minutes of the game were all Cliffe as Southwark struggled to get to grips with the big runners. High tacklers were brushed off as Cliffe collected the kick off and battered their way to the Southwark twenty-two. A rumour swept the pitch that Matthew Evans-Young made a tackle. After an initial struggle the Southwark defence rallied as they realised the job would be easier if they got off the line and hit the lumps low.

Eventually Southwark got a twenty-two drop out to relieve the pressure. This led to: a determined chase, a MASSIVE smash, a forced penalty, a kick to the corner, a collected line out and some pick and gos. 7-0 Southwark. Clinical.

This gave Southwark confidence that given the opportunity they could capitalise - and so it proved as Rob Waugh finished off some hard running from Matt Hunt for Southwark’s second. The third came from a long bouncing pass from Jack Hooper which was collected by Hugh, who proceeded to ignore his support inside and out and trotted over from halfway line. As Ruairi Hourihane used to say - you don’t become top try scorer by passing the ball.

Three conversions from the metronomic boot of Jason Evans left Southwark 21-0 up at half time. A decent return on not much possession. The sage words of advice at half-time from coach Ollie Mooney were to ‘keep at it’.

These words went unheeded as Southwark failed to collect the kick off and immediately put themselves under pressure which ultimately led to Cliffe sneaking over. This brought a reaction from Southwark and more big hits were put in, with Eric Hall, Israel Sotonwa and Alex Mulchrone leading the defensive line. A period of possession led to a kick to the corner and Southwark’s much-vaunted rolling maul powered their way over the line, with Tom Swierkosz upsetting Ollie Walton by coming up with the ball.

The last twenty minutes of the game descended into a brawl with Eric getting the better of three crusaders, who by this point seemed to have lost interest in playing rugby. Having dished out a beating he topped off a bullocking performance with a try in the seventy-fifth minute - much to the joy of the players and fans alike.

Tl:dr:
Someone get on the phone to the open top bus company.

MoM:
Difficult one to pick as everybody played well. Jason Evans had an excellent debut at 10. Eric brought his usual physicality. Sam Lamont rampaged like the Northumbrian bull that he is. Hugh kept his try count ticking over. Ryan Thomas looks lively every time the ball comes near him.

I’ve listened to Coach Mooney and Israel Sotonwa gets the nod for a series of hits that the Crusaders will still be feeling long after their crusading days are over.