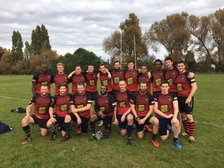 A questionable try and too many penalties cost the Rebels

Rebels travelled away to Beckenham on a grey damp day.

Upon warming up the referee calls the team in, explaining that the hosts were struggling to field any props that day. Even before KO the sides are forced into uncontested scrums.

The game begins with Rebels playing good rugby however a handling error puts the travelling side under some early pressure just outside the twenty-two. The static scrum allows Beckenham to have clean ball and they manage to move the ball well in the first phase breaking the Rebels defensive line. The covering defence is too good and the attack is neutralised with Rebels gaining possession and kicking for touch.

Beckenham came back with more pressure, firmly camping them selves on the 22 for a few phases until a penalty came their way. They elected for posts and converted. 3-0 home team with 10mins play.

Rebels took the restart as the opportunity to gain some territory and the arm wrestle resumed with the poor weather making its impact on the sides handling.

A Beckenham forward was caught fowl and pinged for not rolling away. Debutant Ali Dunn took the opportunity to make the score line level with a penalty kick.

3-3 going into the second quarter of the game and it continued to be a scrappy affair, however Rebels were making good headway in building momentum through retaining possession well. The away side were building phases in the oppositions twenty-two, looking threatening with ball in hand. The Rebels side were looking good until they knocked it on giving up all pressure they had worked so hard to build.

The momentum was lost, but only temporarily. Moritz Hartmann pounced on a loose pass out wide, intercepting it and going over the white wash. A try the away side deserved through previous play. Dunn converted making it 3-10 going into half time.

A few words by captain Seb Ellid, as Rebels ellected to stay out in the open during the interval.

Second half went under way, resuming the same trend of match play with possession changing often as well as territory.

Continuous penalties meant it was hard for Rebels to get into the second half, letting slip any firm grasp of putting the game to bed.

Southwark found themselves with a line out just outside the oppositions twenty-two. The set piece had worked superb throughout the match. Off the top from Alex Mulchrone with ease. The hone side has pushed the limits of the Rebels back line with good rushed defence, this play was no different. With Dunn under pressure he chose to kick his way out, placing a chip for himself over the rushing line.

The Beckenham inside centre didn’t take a fancy to this play and decided to grab the scruff of the fly half’s collar pulling him to the ground, without the ball whilst smiling directly at the ref. Penalty and a yellow card. The side elected for posts but Dunn missed.

Rebels tried to take advantage of the added man although the side pieced together some great attacks they just failed to convert.

With the home side back to full strength and the penalties taking their toll. They are allowed back in the game and break through the Rebels line going wide and into the corner. It looks like their winger knocks it over the line, but no one could clearly see and neither could the ref. Thankfully Beckenham’s Physio pipes up to the official saying the ball was grounded. The ref whilst saying I can’t see if it was a try, was far too willing to give the home side the score. The saying of ‘only give what you can see’ didn’t apply.

Beckenham convert and the scores are level again going into the final quarter.The final throws of the game resemble a tennis match with both sides resorting to kicking the way to a win.

Beckenham get awarded another penalty in the last play of the game. They find themselves picking and going on the five metre line. Continued efforts by the home side finally prove fruitful and they edge their way to a try.

The game finished 15-10. A disappointing result for Rebels who had every chance to close the game out. However with too many penalties and some very questionable decisions it wasn’t the teams day. The Southwark team look to bounce back as they travel away to Old Dartfordians.