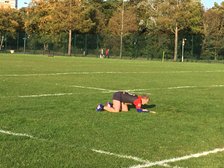 Report Thanks to Oliver Jackson.

(The order of events below may not be fully accurate, I had a beer afterward)

The 19th of October was a good day. Ideal conditions greeted the tourists at Burgess Park, a warm, windless morning combined with a ruthless dismantling of the Aussies by Jones’ men in the early hours. With the tourists looking to make it two wins out of two a strong squad had been assembled to take on HSBC II. This was in spite of our captain complaining of a hangover of gross proportions and the sudden realisation that a there was not a fly-half on the team sheet. Fortunately, debutant Adam boldly, if a tad reluctantly raised his hand to have a run out at ten.

The tourists started strongly, with Dave Ellard imperious under the high-ball, strong hole-punching running and ferocious tackling from both forwards and backs alike ensured clean ball was retained and the tourists worked methodically up the pitch. Will ran the show for the first period from scrum-half allowing the forwards to generate space with some big carries. It should be noted at this point, that this HSBC sides was a very large and physically imposing one in comparison to the tourists, especially in the backs, but as science has taught us, bigger is not always better! Monty opened the scoring, with a barn-storming run from a tap-penalty dragging several hapless defenders, still clawing on to his 8-foot frame as he charged to the line.

HSBC lost the first couple of scrums and decided they’d had enough scrummaging for one day, and scrums, much to Grant’s dismay became uncontested. With Will keen for the tourists to play at pace, and HSBC simply unable to live with the liquid-rugby being played both in front of them and over them, a second try quickly followed. Dave was rewarded for his good work reaching over from a short distance. The third quickly followed (I think) with Chris getting in on the act after some sumptuous hands from Grant. HSBC were given a brief glimmer of hope, with sloppy positioning by the inside centre (by myself) causing confusion in the ten-twelve channel gifting the visitors an interception try not too dissimilar to the one scored by Anthony Watson in Oita earlier in the day. A try which will hopefully force the curtains down on Kurtley Beale’s deeply mediocre international career.

Interception tries aside, in truth, HSBC were never really able to get a foothold in the first half of the game despite the clear size advantages which they possessed. In part this can be attributed to vociferous cries of ‘exit’ ringing out from the our backs whenever the ball came anywhere near the twenty-two, and Elliot’s relentless kicking, pinning HCBC back in their own half, something the Aussies could perhaps take a lesson or two from. This combined with the forwards utter dominance at the lineout, to the extent HSBC later opted to take tap-penalties in their own twenty-two to avoid kicking and losing the ball at on their own throws.

A vintage moment followed, with perhaps the pick of the tries. Sam looking very much at home at outside-centre, taking advantage of the space generated by the forwards gathered the ball near the halfway line and scythed through the HSBC defence with a pace they were simply unable to live with. He slid under the posts for his first of the day. With Will’s unfaltering kicking, even from wide out the score was being pushed even further out of the visitors reach. However, sloppy, complacent work from the tourists followed. Several questionable high-tackle calls and poor work going off feet at the ruck allowed HSBC to score from close range. However, the tourists bounced back to finish the half well, another excellent kick from Elliot and the team’s accompanying chase pinned HSBC back to their in-goal area, only being denied the attacking platform of a five-metre scrum by the half-time whistle.

Half Time – Tourists comfortably ahead, but a game still not quite put to bed yet. Sadly, Will was forced off round this point with an ankle injury and Grant moved to scrum-half.

The tourists picked up where they left off Ron, Chris and Monty tearing holes through the HSBC defence, with Monty cruelly brought down roughly eight metres shy of the line. However, he was able to put a delightful pop off the floor to allow me to continue my self-aggrandising habit of only scoring tries which are put on a plate. HSBC were then able to cross the line again after further ill-discipline on the tourist’s part allowed them to make their way up the field. This was in spite of the referee’s initial decision to declare the ball held-up. Cue protests from all HSBC players in the close vicinity, leading Grant, ever the sportsman to command the ref to ‘just give it to em’. A decision that thankfully, wasn’t regretted later.

If Sam first try was exquisite, his second can only be described as comical. A try that evokes memories of Johnny May’s try against Australia in 2017. A rough hack through after poor hands from their backs appeared to be heading for the side touchline. However, similarly to Kurtly Beale two years before him, their winger seemingly had no appreciation for the shape of a rugby ball and the implication this may have on the direction it bounces. The ball flirted with the touchline and as Sam raced past him to collect the ball on his way to the line, the horror rapid manifested in the wingers eyes at his humiliation as it has in Beale’s. Naturally, in spite of their not being anther defender in sight Sam generously opted to place the ball in the corner to give Elliot a test of his newly bestowed on kicked duties, much to his protestations. Adam then went over under the posts for the try his performance deserved, which can only seemingly be done justice in the man’s own words “I stepped the 10, 12 and 15 to score under the posts. They don’t call it joue rugby for nothing. Up the WARKKKKS”.

The tourist’s final try came shortly before time, excellent hands by the back parted the HSBC defence, allowing Onu with his blistering pace out wide to complete a very well deserved victory. Calloway then had a try disallowed just on the full time whistle with an interpretation of the offside rule which baffled all.

Final score 54 – 24; it is often said that score-lines can flatter the winning team, this cannot be said of this match. I will also concede that this report is missing a HSBC try, but I can’t remember it!

MOTM: On a day where not a single tourist performance could be faulted, and there were many contenders for this award, Will for his superb work establishing the platform and providing the ammunition to tire this big HSBC side out was elected. Additionally, select honourable mentions, amongst many should go to Adam, who on debut had a fantastic game running hard (with his unconfirmed claims of making 120 metres) and providing good distribution from an unfamiliar position, and Monty and the Grants who led from the front tearing the defence apart with their powerful running.

DOTD: Monty, when you knock the ball on whilst taking a tap-penalty, you are asking for this! An audacious if debatably successful chip, which Grant ‘allegedly’ called for should also not be passed-over. A clear winner in this case.

Special mention to the HSBC lads who stayed behind, shared some beers, helped with namings and after match ceremonies. We look forward to visiting.

The Tourists should head into their next match, a grudge match away at Old Allenynians with confidences flying high after some very good performances thus far. However, Elliot will miss out after spectacularly falling down the stairs and head-butting a wall in the late hours.

We welcome Crayola - Bed-Wetter & WHAM! to the Club.