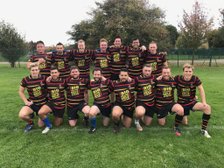 You Don't Win Scrums With Salad

Warning: this report was compiled by someone who wasn't really paying attention and therefore may bear no resemblance to reality

Oh. My. God. What a game! What a game! It had everything - early injury substitutions, red cards, yellow cards, fondles, tries, kicks and handbags. England vs Wales was indeed a stunner, but first we had a match of our own to despatch.

It was a bright, sunny but still slightly chilly day at The Cage. Having a key to the lock-up, but not the gate, meant that the pitch set-up exercise involved some of the more spritely players climbing over the adjacent container and throwing the required sticks and pads over the fence. We made sure that we had the tackle bags, as Ron demanded.

Kick-off time was not confirmed as 2.45 until quite late, so the Mighty Tourists spent lots of time unsure as to how long we had to warm-up. Although we'd had quite a lot of rain in the preceding weeks, the pitch was still fairly serviceable despite looking a little threadbare in places.

Erith did warn us that they may be short-handed and although we offered them players, that offer was refused right up until kick-off when it was obvious that 15 v 13 wasn't perhaps the Union vs League match we either wanted, or, indeed, the country deserved, under the government's "levelling up" agenda. So with only 14 men on each side (newcomer Terry volunteering to start for Erith), the match kicked off. This kick off was immediately caught expertly by a Lancers players, albeit Terry who, as noted, was playing for the other team.

There was a bit of running and throwing and maybe a try was scored by us before the first big event the sizeable crowd had been demanding occurred: a scrum. The Erith front row was aged and grizzled and formed a lopsided pyramid shape. This meant that the loosehead side of our scrum had a job to do to ensure that he could get under the diminutive tighthead and try and drive straight. However, despite our best efforts, they turned over our scrum with some old-school hooking and, frankly, although we improved over the course of the match, this was an area where Erith had a clear advantage.

There were other scrums throughout the game, but, in a break with tradition, this report will concentrate more on some of the other less interesting incidents. It is important that the spotlight is shone evenly and this is something I will demand that other writers also do. I know the audience demands blow-by-blow accounts of scrummaging, but frankly, sometimes other facts deserve their own space.

In between the scrums, there were a few kicks to touch which resulted in some line-outs. Here, the lifting was second to none and despite the fact that Erith clearly only had one jumper, for some reason we didn't steal very many and didn't always win our own. Fortunately, all these missed lineouts meant that there were more scrums, for which I'm sure the crowd were grateful, as were the backs who clearly love scrums too as they are always knocking the ball on or throwing it forward just to get a few more. Being heavily involved in the scrums, I'm not quite sure what the backs do during these lengthy periods, but I'm guessing it must involve swapping style tips, hairdresser recommendations and back issues of GQ magazine. Either that, or they must love watching scrums as much as the 40-50 people assembled on the sidelines.

Unfortunately, some forwards didn't get the message and insisted on scoring some tries to give the front row a break from scrummaging. After starting an argument with the referee which saw us marched back 10 metres, Captain Ping substituted himself and allowed David Ellard a run out. He immediately repaid that trust by breaking through half a dozen tackles or so and appearing to drop the ball on the line. The referee immediately got on the radio to the TMO for a review. After a lengthy pause and multiple replays via Hawkeye, the TMO declared that the ball pitched outside leg stump and that therefore Ellard was Not Out. This confused the assembled crowds, but should be used as a salutary lesson on the perils of sharing facilities with a cricket club. The referee sensibly ignored all this and gave the try anyway, much to my chagrin. Note to future subs: at least allow a reasonable period of reflection before scoring a try.

Fellow forward Ade also scored a try by catching an intercept. This was also referred to the TMO who said it was a deliberate handball. The referee stopped using the TMO after this.

All the other tries (and there were many) came from backs who capitalised on the hard work the forwards put in securing a scrum, ruck or maul. As penance, scrum-half Will Slatter was yellow-carded due to the sheer number of warnings David Ellard had racked up for high tackles (he can't help it, sir, he's lanky). This was a great piece of team spirit and the main reason Slatter avoided Dick of the Day. That and the fact he didn't come to the pub.

In terms of Dick of the Day, Captain Ping's big mouth won him the honours, this despite a stiff challenge from Ron who also substituted himself amongst many, many other offences. A further shout-out should be made for Greg Heeger for hat-trick avoidance, only scoring a brace in an 8-try victory. A further, further shout-out should be made for Rusty, who scored a try and then limped off with an ankle injury which miraculously healed when he realised he could seem the scrums much better from on-field.

Man of the match was undoubtedly Ade who seemed to be involved in all that was good on the pitch. Uche deserves an honourable mention for also putting himself about to great effect, making many useful breaks and switching positions when Ron had his "moment" (same for Will Baker who entered a difficult scrum and got a shiner for his troubles). Paul Lezzi made some expert kicks (including 4 conversions).

Final mention should go to Lewis and Terry who not only scored tries for us, but also slipped on an Erith shirt to ensure the game went ahead. It is important to note that you can't have scrums without rugby matches, so the crowd owe you dearly for making sure that those scrums took place.