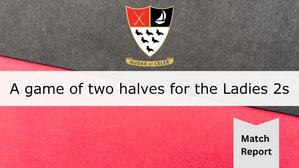 A game of two halves for the Ladies 2s

After a road trip through the Sussex countryside to Cumnor House School, the Ladies 2s got ready for what was sure to be a tight game – even more tight than we had thought as we were unexpectedly a player down, giving us only ten. For a brief period, it looked like it might be ten vs eight as Mid Sussex had some players travelling from another game. We hoped this might give us a chance to get some early goals but unfortunately their remaining players showed up in the nick of time.

Within a minute of game time, Lisa pulled a muscle, preventing her from running much – now we were down to nine and a half players. Despite us trying to play a defensive game, three goals to Mid Sussex came in relatively quick succession, all coming from the same player.

A quick halftime pep talk from vice-captain Maureen saw Wick fight back in the second half. By making simple, more accurate passes we were able to get the ball much higher up the pitch, clearly surprising Mid Sussex (although they quickly got over that!). Izzy W managed to get a few shots on goal! Despite failing to convert our chances, we also kept Mid-Sussex from scoring again, including defending several short corners.

The game finished 3-0, but having kept the second half to 0-0, we left the pitch feeling really good about our performance and looking forward to facing Mid Sussex at home – and hopefully with a full team!