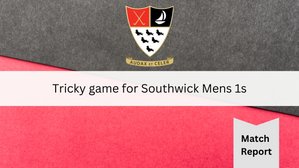 After a well welcomed week off, Southwick Mens 1s went into a game without aching limbs and complaints from left and right for the first time this season!

Brighton 2s were the travelling opponents, who perhaps thought that bringing a speaker and blasting music in the changing rooms before the game would intimidate the Southwick lads. Needless to say, the mix of dance and EDM music had little effect on Wick, who started the game relatively strongly, crafting a few neat moments in possession whilst remaining solid at the back.

However, it was Brighton who drew first blood, taking a 1-0 lead with the game poised on a knife's edge. Matt Rickson, still dazzled after scoring in the last 2 games, ended up hacking down a Brighton forward in the D, resulting in a P-Flick. Up stepped the Brighton forward, only to be spectacularly denied by Matt Scrase, sprawling to his left to flick the ball over the bar. This shift in momentum saw Southwick capitalise after some tricky work from Nick Slater in the D won a short. An emphatic Matt Vokes slammed home the equaliser, a wonderful drag flick into the bottom left. Brighton would then press onwards, stealing another goal just before half time, leaving Southwick trailing 2-1 at the break.

It seemed almost every decision went Brighton's way in the second half, most notably Ciaran being shoved off the pitch resulting in a Brighton short early in the second half. Needless to say, this pressure paid off and Brighton found themselves 3-1 up. Despite their backs being against the wall, Wick fought back and managed to find a response, Matt Vokes again drag flicking home to make it 3-2.

Chances came and went for both teams, Nick unable to convert with his reverse being a key moment. Then the wheels fell off for Southwick, and another P-Flick saw Brighton pull away to 4-2. Both Ollie and John Glover received yellow cards, Ollie for picking a fight and then backing out as quick as he got in it, and John for essentially standing and watching, but being “intimidating”.

Wick held on until the whistle went for the final short of the game, which was put away from Brighton, who ended up winning 5-2.

A game not without controversy, but Brighton were certainly a solid team capable of playing fluid attacking hockey, so no real reason for Southwick to be too upset about the result. Onto the next one.