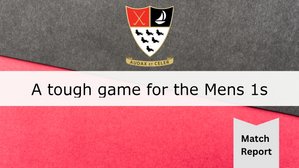 Another tough game for the Mens 1s

Another tough one for Southwick this week as the Mens 1st team fell victim to a 9-0 loss against the superior Gilford 2s.

Southwick started with a defensive intent, knowing that in all reality playing fluent attacking hockey against a side such as Gilford could only end badly. The game was relatively contained in the opening passages, with Wick keeping a half court press and solid back 4. This was until Gilford drew first blood, and then the floodgates opened. Grant’s (undeserved) yellow card left Wick with 10 men for the next 10 minutes, which saw Gilford fully exploit the gaps left, leaving the score 4-0 at half time.

Southwick only had a bare 11 for the game, and perhaps a lack of fitness started to show in the second half, with Gilfords fluent hockey picking the holes in the Southwick defence. Small bright moments for Southwick came deep in the second half, as a few short corners amounted into nothing, but pressure well built by the depleted and run down Wick. A shout out simply has to go to Ciaran, who somehow managed to play a full match despite having only about 34% of his body working.

Another rough result for the mens 1s, but spirits shouldn’t be damped all too much. Given the circumstances of having a bare 11, practically 10 when factoring in Ciaran’s calves, it’s not a bad result at all. We knew this league would be tough, and the next 3 games before Christmas will be no different, but there are points to be won. Onto the next one.