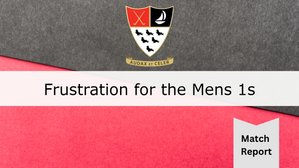 Saturday 5th November saw a lacklustre performance from Southwick Mens 1s against Crawley, as they succumbed to a 7-1 loss in the drizzly conditions. A really weak start from Wick saw 5 goals conceded in 20 minutes, which would have been more if not for Matt Scrase saving his second P-Flick in as many weeks.

Wick were simply exposed by Crawleys overlapping wing backs, but frustrations grew as Wick were second to every ball, not strong enough in tackles and wasteful in possession.

The second half saw improvements all across the pitch from Southwick, however the magnitude of the scoreline was too much to overcome. It didn’t help that within 2 minutes of the second half, Wick conceded again. This time, unlike the first half, Wick responded with a goal of their own, a lovely ball into the D deflected in off the stick of Matt Vokes.

The second half was certainly more competitive than the first, but again Wick conceded late on, George Brigden with the assist of the season, sadly to the opposition, as his attempted clearance went straight to a Crawley forward who dispatched with ease. Grant has to get a mention at the end here, as if not for his defensive heroics, the scoreline could have been pushing double figures.

A setback from the positive progress made in recent weeks, as Wick now enter a tricky run of fixtures against teams towards the top of the table.