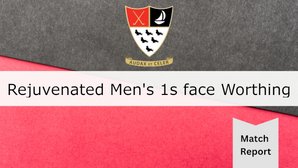 There was certainly a different energy to Southwick Men 1s as they went into a grudge match against Worthing 1s this week. After conceding 30 goals in the last 3 games, Wick were looking to change their fortunes around with a big performance against the solidly performing Worthing. Another benefit for Wick this week was the size of the squad: a solid 15 players for the first time for what feels like years.

Even with this fired up squad, Wick somewhat stumbled out the gate, conceding relatively early to a well worked Worthing move. Despite this, the difference in performance from last week to this week was staggering. The fight, the desire, the passion was all there from Wick this week, challenging Worthing with every play that unfolded. Making the game grubby was key for Southwick, and the slower paced, counter attacking play worked until Worthing pulled ahead with a beautiful drag flick from a short corner. Not to be damped for too long, Wick pulled a goal back on the counter, a mistake from an unnamed Ex-Southwick player allowed Nick to drive directly at the keeper, before squaring it to Matt Vokes who dispatched with a ruthless touch.

2-1 at half time with the game truly in the balance, especially with a disallowed goal just prior to the whistle for Wick.

The second half started well for Wick, solid in defence whilst looking to break the Worthing backline. Unfortunately, no breakthrough was found despite growing pressure, and Worthing found 2 quick fire goals to pull ahead 4-1. Matt Rickson converted a beautiful John Glover slap to pull another one back, but by this point, the damage was already done. Legs were gone, Macca returned from his knee injury for 30 seconds before getting a green card and returning to the sidelines. Worthing put 2 more past Wick to finish as 6-2 winners.

The scoreline sounds poor, but in reality this was a much improved Wick. If a few decisions went our way, if we converted a few more shorts, the game is completely different. Really proud of the boys this week, onto Oxted 2s next week before the Christmas Break. A huge game for Wick to try and turn around this run of form.