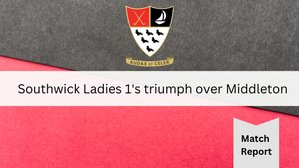 The Ladies 1s had a productive afternoon away at Middleton slotting 11 past the Royals.The defence controlled the game well with passing round the back that would make coach Matt shed a few tears of pride. Dynamic duo, Kirstie and Ria (voted joint Players of the Match by the team), kept the central midfield wrapped up solid, overturning possession and setting in motion some solid attacking play.

Goals came thick and fast in the first half with many the result of slick passing and combined team effort. With the score 7-0 at half time, the opposition then rallied somewhat and the first 20 minutes saw Middleton press a little higher. The defence were able to contain all threats and an attacking style of play saw a further 4 goals to round off the team's highest scoreline for several seasons.

Kirstie was top scorer netting four and the game also saw a triumphant return for Fiona who scored a hat trick. A brace from Leanne and a goal apiece for Ria and Clare rounded off the final tally.