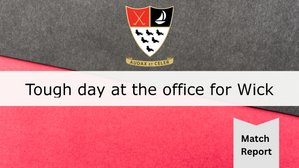 Tough day at the office for Wick

Southwick Mens 1s continued their tough run in of games with a long trip up to Sunbury and Walton this week. A largely depleted Wick made the trip up to London to face the high flying Sunbury, and were met with the expected tough day at the office.

A frustrating start saw Wick fall 4-0 down by the half time whistle, some emphatic finishing from Sunbury showing the gulf in quality between the 2 sides. Despite this, Wick were relatively solid defensively, huge saves from Scrase once again kept the deficit to a somewhat manageable level for Wick.

However, the second half proved to be a true killer once more for Wick, who shipped in another 6 goals for the 2nd time in 2 weeks during the 2nd half. A mixture of sloppiness from the defence, some decisions going against Wick and an overall lack of creativity upfront saw Wick struggle to pose too much of a threat to Sunbury. They were rapid on the counter, were well drilled and had the fitness edge on the depleted Wick.

Honestly, there’s not much else to say for this game, another real frustrating game as Wick struggled to contain Sunbury, and struggled to even escape their own half. A huge shoutout has to be given to the players who stepped up from the 2s to help fill in. Without Tristan, Zack and Andy, we would have only had 9 players. Massive thank you to those guys, who came all the way up and all put in decent performances for the badge. Couldn’t ask for anything more.

We knew this run-in of games was probably going to be the toughest of the season for us, and it’s proven to be a real challenge. However, a huge game against Worthing 1s at home lies next for Wick, followed by another massive away day Vs Oxted 2s. Both games offer our best opportunity to nick a couple of points before the Christmas break, so hopefully Wick can shake off this poor run of form and bounce back for these last 2 weeks.